The hunt is on for thieves who struck at four remote goldmining sites in the Goldsborough area on Thursday night, stealing gold and leaving a trail of damage running into hundreds of thousands of dollars. 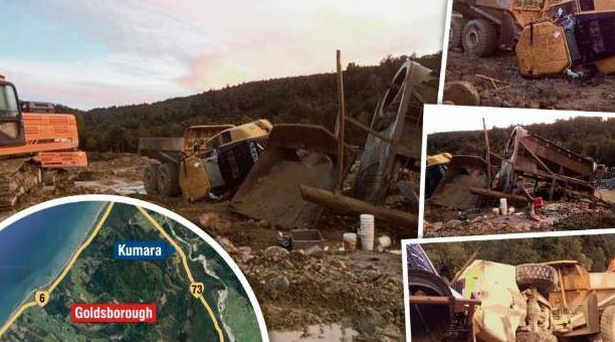 A partner in one of the gold claims, Tracy Jane Billingsley, said on their claim alone the thieves had taken half a tonne of gold-bearing wash and flipped over an almost brand new heavy duty dump truck.

“As well, the thieves started our 38-tonne digger and smashed everything in its path and that included our trommels [gold wash plants] … There was just a ton of damage.”

At least five people must have been involved, and “they knew what they were doing”.

“They broke into laboratories and container units looking for gold,” but left power tools.

Ms Billingsley said she and the other mine owners wanted to alert other operators that the thieves were on the prowl, as claims were being targeted “all over the place”.

"With the price of gold at the highest it has been for some time [currently $NZ2040 an ounce], these thieves know what they are doing.

“It has got to the point where we will have to look at having people living on site permanently to avoid this happening again.”

Scummy arseholes - no need for that sort of thing. Lowlifes, Parameciums, Amoebas, Spyrogyra, Primeval slime - I hope they are caught and trommelized!

bang ….opps sorry thought you were a deer

Justice will catch up with all scummy bastards in time!

What does seem odd to me was, why, if you were robbing them of their gold wash, would you smash up all the plant/ trommel etc with a digger? That would have made a hell of a lot of noise…which allegedly isnt the smartest thing to do when committing a robbery by stealth

My profile would be that it is some kind of payback / Disagreement that has turned sour and
The others nearby are just collateral damage so as to take the heat off just the Primary one they were targeting as from what I believe only one was actually smashed up?
But surely someone in the industry as they knew how to get to each of the sites and knew what they were looking for at each site and with appropriate gear to remove paydirt etc . Bastards messing with peoples Livelihoods.

don’t think even greenies would stoop that low

The Bastards are stooping low enough to kill all the keas and other native species with 1080 simply to wipe out ALL wild four legged animals in NZ with the ulterior motive of denying the rights of decent honest kiwis to hunt so that at the end of the day - nothing to hunt means no need for hunting rifles and they to will be banned!

you are so correct. wipe out every living 4 legged thing. its funny sitting back and watching how it s all unwinding, starting way back in t5he cullers time. read " pack and rifle " and they were using 1080 back then.
this winter I will be unable to walk my dog in bush from the buller river to the top of the south island without the fear of by kill been on the ground.
now that I have had my rant I will sit back and wait for a visit from the police to take my rifles. it seems if you get vocal they pay you a visit.

That’s alrite Keith if taxcinda gets her way you wont be able to speak out , they’ll take free speech along with your rifles .

yep , im pleased im the age I am . by the time it happens I will be telling the daisy’s how to grow. don’t worry it will happen as you say. sooner than we think.

has anyone heard of any updates on the vandalised gold site. any suspects or arrests

Only this update in the ODT a few days ago…

"Worried West Coast goldminers have posted a $20,000 reward in a bid to catch the thieves behind a cluster of gold heists, break-ins and vandalism at six or more claims in the past week.

On Wednesday evening, 52 miners representing at least 60 gold claims attended a meeting at the Australasian Hotel called by the West Coast Commercial Goldminers Association in response to the thefts, which last week targeted the Goldsborough area and a month earlier, Nelson Creek and Reefton.

The meeting agreed on several initiatives including a $20,000 reward leading to a conviction and
employing a security consultant to help mine operators beef up security at the secluded mine sites.

Goldminers association president Brett Cummings said miners were not so much outraged by recent events but had resolved to act now with the police, rather than people taking matters into their own hands.

“People are resolved. They know it’s happened - they realise that leaping around and yelling at the police isn’t going to help.”

Ultimately, with some mines having only a few people on site, and the possibility of confrontation, they felt it was better to seek proper help, Mr Cummings said.

As well as offering a reward, the association will commission professional advice on how to address mine security.

"We’ve agreed to put the money up for a lot of that sort of stuff.

“We’re all a bit surprised about how much of it has been going on … it started to escalate a few months ago and it just seems to be slowly increasing.”

The economic urgency of the thefts, together with the intentional damage to expensive equipment and machinery could not be underestimated given the about 60 gold claims operating on the West Coast.

“We’re talking about a few hundred people’s jobs. It’s the damage that hurts people … it’s like robbing a shop and then burning it down.”

Insurance was an issue given the practical difficulty of installing electronic security measures on the West Coast due to lack of power or cellphone coverage.

“It comes down to security … obviously the best thing that we do is stop it in the first place.”

He said they had to work with the insurance sector, “however it’s very hard to insure for wash in the table”.

Mr Cummings said the recent events followed a spate of fuel thefts at remote mine sites about 18 months ago.

“The only new thing in the society on the West Coast now is the whole infestation by gangs.”

Any link to that aspect of organised crime was an open question.

“People have got to fund drug habits. Gold is one the easiest things to get rid of … that’s something that has got to be clamped down on.”

Mr Cummings said police were involved and doing the best they could.

They’re back at it…

Over $500,000 of damage done to heavy machinery at West Cost mining site A truck and trailer at the mining site was pushed over and the cab smashed in. Photo / Supplied

A West Cost mining company has been left devastated after hundreds of thousands of dollars of damage was done to heavy machinery.

The manager of the gold mining company, who requested the business remain anonymous, said he arrived at the site on Tuesday afternoon to find the gate lock had been cut and “all the gear was smashed up”.

He said the keys to the vehicles were kept at an on-site office, and were stolen when the offender/s smashed through a window.

"They then jumped in a digger and used it to smash the other vehicles.

“There were three big trucks - 20-tonne trucks - a fuel tanker, a loader, and two or three diggers smashed,” he said.

The offenders used a digger to damage and push over various heavy machinery, including this loader. Photo / Supplied

Images show a loader pushed on its side, a truck and trailer also pushed over with its cab smashed up and contents tipped out, a fuel truck with a smashed in roof, and a digger with its door and panels smashed in.

“To replace them will probably cost over $1 million, but it depends on the insurance analyser.”

He said he “felt awful” on discovering the damage.

“It’s horrible because we need to mine to get all our costs covered, and I am not sure if insurance will cover the lost income,” he said.

A fuel truck had its roof smashed in during the incident on Monday or Tuesday. Photo / Supplied

The manager said the offender/s also stole a digger battery and a couple of tools.

He said police had been to take finger prints and were conducting an investigation.

“They will let me know once there is any information.”

He said a similar incident had happened in June at a nearby mine, so he was questioning whether the incidents were related.

“The people who damaged the machinery must be a really good digger operator because they was not much mud on the ground, it was very clean,” he said.

“They knew what they were doing, so I don’t think it was young people.”

Earlier in the year, there was also a break in on the site where the offender/s stole roughly 100-200 grams of gold, valued at about $7000, he said.

Police confirmed they had received a report and are currently conducting enquiries to gather more information.

• If anyone has seen anything or has any information, please call your local police station or Crimestoppers anonymously on 0800 555 111.

A digger had its door and panels smashed in during the rampage. Photo / Supplied

To be that callous then my guess would be a certain brand of environmentalist.
In my view the stupid claim owner should have learnt from the other acts of wanton vandalism and set up security cameras…if he had done so then it would have been all over Red Rover for the slimeballs…give them a dose of their own. Identify - visit - Bush justice when ‘they attack you’ THEN hand to the Police.
Wankers, turd fuckers, parameciums, amoeba, parasites, gay bois and gutless bastards.