The Most annoying things that happen during gold prospecting 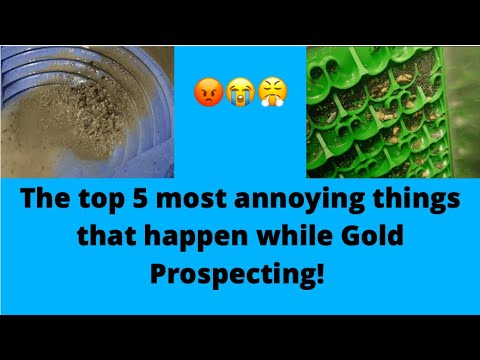 My #1 pet peeve is not finding any gold!

or bursting hoses or a new one got me last year , me & the misses turned up to crank the 8” up and she says is the dredge supposed to be on a lean ! 1 look and I new a pontoon had spring a leak it was bitch to fix and as it turns out my fault as prior to that I’d shot at a magpie out in the paddock…missed the magpie and hit the dredge

…I hate magpies too .

Watching a good flake disappear from your sluice because it wasn’t setup properly. That doesn’t happen anymore, newbie mistakes

Yeah, that happend to us on our first trip we did about 5 buckets from a hole and got about 2 flakes, turned out our sluice riffles were round the wrong way XD. We then went back to that spot recently and got about that from one pan right next to the same hole.

Makes me think…
Ok so l have gone off gold mining and over the years the following has occured, just to piss me off; -

Fucking spark plug broke in half - once

Riffle box came off underwater dredge and l didnt notice it for half an hour - a few times - that’s home made for you!

Metal detecting diligently for ten minutes with Gold Monster and the goddam thing isnt switched on - many times!

Wheel came off Landrover - I kid you not - once

Tent got blown away - once

Got pissed at Macetown and carefully calculated the height of a large branch and drove under it at 1.00am New Years - forgot gold dredge was on top - wrote it off.

Landrover died in flood coming out of Macetown - once. Had to leave it in Arrowtown while l went back to South Canterbury

Trapped in tent for eight days due to floods - only consolation was 28 penny weight (42 grams) in half an hour in shallow water where l could actually work in the current. Included a 13dwt nugget

Put pan with several nice gram or so nuggets on the bank and was throwing rocks out of the river - ever seen a gold pan doing somersaults. Got all but two nuggets back using detector

Such are the lives of gold miners. Those are only the ones l can think of offhand!

Damn that is a massive list goes to show how long you must have been in the job.

We have only being doing it a few years so far and yeah all we can really list is Arriving at the creek and it being in a large flood and unable to mine (trust me I tried ended up losing a pan down creek I gave up after that) and once we brought the detector but the batterys had about 10 minuets left. (didnt really matter as 1 creek we go too has a TON of lead bullets or something like every couple of metres so its impossible to detect, and then the public areas are hammered and the other creek we go too despite it being very nugget bearing in the past by NZ standards we have never got anything golden despite countless hours, maybe its because the bedrock is a big too deep for the detector? Or maybe all the nuggets are way up the back where all the shafts are maybe although we tried up there but all it really was was tailings from oldtimers and no gold when we actually get a fair bit testpanning further down and have pulled out multiple pickers). Anyway back on topic yeah we can barley list 1/2 a dozen things and none even compare to most of yours XD. Hopefully we do not encounter too many in the future.

I could list more and yes have gone to the river to find it in flood.
Bullets are a nuisance to detecting. In the Arrow many years ago we found a spot where some old miner must have spent his Sunday afternoons shooting his Adams or Tranter revolver at targets as there were many old pistol bullets. It was a spot near the main road bridge. That would have been around 1973.
For advice on using detectors ask Kiwijw.

I am not so sure that touch powder was involved but candles, gas cylinders and so on have caused some crisis’s but thats another story…or did I tell that one on another thread?
Or was that the story about blasting out the crappenhauser hole (Long drop) or the screaming mimi - ever tried a…hmmm better not tell that one! One day if someone wants to dig a six foot perfectly round hole I will demonstrate the screaming mimi!

Love it old mate ! Keep it up always on point !

Bullets are a nuisance to detecting. In the Arrow many years ago we found a spot where some old miner must have spent his Sunday afternoons shooting his Adams or Tranter revolver at targets as there were many old pistol bullets.

WHAT!!! Thats the pot calling the kettle black. I recall a bloke who just this year took me up mountains, across boggy marshes, through 10 foot high tussock country, down dales & up gullies, down waterfalls, up waterfalls, past hard rock gold mines, through creeks all to reach this golden Eldorado creek of fame & fortune. While he got on to a rich crevice & I went further down stream I thought I had hit the mother load. Signal after signal & lead bullet head after lead bullet head until my pockets were so full that I had trouble keeping my pants up.

I headed back to him & showed him my hoard. He said, “Oh yer, they will be mine.”

Twas a great day none the less & grand country.

As to knowing detectors…I don’t know a bloody thing.

On another note. Is there anybody out there using the new GPX 6000. If so, what are your thoughts?

That must have been one stupid bloke leading you astray like that…knowing you the lack of gold made you so bored that you would have gone ‘ho hum’ and just lain down in the tussocks for a nod off while the other stupid sod worked like a Trojan for bugger all!

I thought the mother load had something to do with getting females pregnant hence the saying “I gave mother a load” - I am not quite sure what that refers to but it sounds a bit dubious!

I also forgot to say that one of the most annoying things gold mining is lead bullets - but then again dont you just get a buzz when the detector nearly blows your ear drums and you think your onto the biggest nugget imaginable. Reminds me of a certain character known to us both. A guest from Belgium with his 5000 gets a signal and merely passes it by with the comment “Iron” - our certain friend gets a signal on the exact same spot’ screams out “Ive found a nugget” THROWS his detector to one side as though hes chucking it away and for a couple of minutes you cant see him for flying dirt and rocks - the end of a pick!

knowing you the lack of gold made you so bored that you would have gone ‘ho hum’ and just lain down in the tussocks for a nod off while the other stupid sod worked like a Trojan for bugger all!

Like someone on this forum has said, “There is no gold on your place”. I tend to believe him.

I know of a shovel head I left for Henry to dig up.

Absolutely correct! Its all an illusion, enhanced by a liberal supply of ‘cough medicine’ distilled and bottled in Scotland!

Amazing how common old pick heads and shovel blades are and even the old stone forks turn up now and again - many moons ago I remember finding behind the remains of a chimney several shovels and picks, stacked there when the miners left and inside the hut a dolly pot and a fully bottle of Davis’s Painkiller…still full after all those years.

Shotgun shells filled with the smallest bird shot imaginable might work wonders! Bring them down in squadrons!

Hey Lammerlaw, I was thinking of trying your “cough medicine”. That might keep them away.