Prospectors out in force as gold prices reach fever pitch

Anyone noticed my gold prospectors out there than usual?

Prospectors out in force as gold prices reach fever pitch

Record high gold prices have prompted hobby prospectors to dust off spades and pans and head to South Island rivers.

No, not where I go. Not a soul. They probably aren’t as mad as me.

Interesting. The gold is still there if you know where to go but knowing where it is likely to be found and knowing how to go about it is another story. In my case l wish all decent honest Kiwis the best of luck because l would rather they find it than fucking foreign parasites.

Geogre Carlin…" and you know something? They’ll get it. They’ll get it all from you sooner or later cause they own this fucking place! It’s a big club, and you ain’t in it! You, and I, are not in the big club ." American Dream Speech

Hi Graeme, Only because our government allows & even encourages the foreign parasites. I see the government has invested 15 million $$ towards the reopening of the Blackwater mine up at Waiuta. Three years of infrastructure work before any mining. Including a 3.3 km decline tunnel. You can bet your bottom dollar it will be an overseas company. I don’t think it is Oceana Gold but it could be a subsidiary company. Why can’t the govt invest in local interests or make it easier for kiwis to get out there? Especially in this Covid environment & job losses. I dare not suggest the Govt get involved in mining as that would just end up a shambles. But why ship all OUR gold off shore?? Just does not make sense to me.

Most if not all of the politicians are brought and paid for(born and breed political class) and have been indoctrinated by fraud science like the church of Al Gore CO2 Whores and there followers. It only takes a generation to brainwash people,CIA call it Mind blanking operation mocking bird good place to start,operation paper clip etc.

Next is cashless society, Jacinda Ardern(commie) She has accepted money from chinese communist party,john Key,Helen Clark etc are all part of the same family that funds both sides, Thats why current government burrowed 50 billion off the private bankers further putting kiwis into debt, ok for her she will get nice job again under Tony Blair(queer). New Zealand started getting infiltrated in the 1960s but has always been fucked from start cause of the Queen and Crown family ties. Why else you think princess Diana sons left the royal family, prince Andrew and all his wealthy sick rich mates invovled with Jeff Epstien, Another reason why they distract people with the Scamdemic is to keep people pre occupied distracted, entertained

Art of War , Sun tzu said … “The whole secret lies in confusing the enemy, so that he cannot fathom our real intent.”

Social Credit Party want to burrow from New Zealands own reserve bank, savig 5 billion in interest alone that could alone in itself build infrastructure, housing for kiwis, boasting local businesses and being more self reliant on our own Resources which we have plenty of.
Rest of world will still want our products.

Wow, sounds like you’re the brain washed one!
Leaving this forum, so much stuff I’ld rather not have in my inbox.
Good luck!

Just look at who funded Communism buddy this is old cartoon picture, always the response from un informed people who have no memory…you do realise chimps have better memory capabilities than Humans, everytime they beat humans at memory test, no wonder humans keep following the same old patterning ya stuck in time loop lol…https://www.youtube.com/watch?v=zsXP8qeFF6A
so whos the real chimp now lol 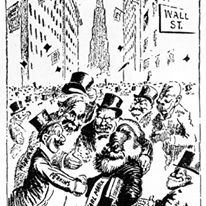 Follow the money honey, or i should say counterfeit money that is.

Interesting article. Might need to hire security mate to keep those guys away from our ground Gav!

Havent noticed too many people out and about but its still early days and the weather is cold. I think once its starts warming up there are going to be a lot of claim owners dealing with poachers.

Will be interesting if the trail cams I’ve got setup start picking up activity. I’ve not even had any interesting wildlife turn up yet, just the odd bird setting them off.

Might have some Chimps turn up Gavin on those cameras. Apparently they have better memories than us. Follow the Chimps as they will know where the money is mate
#PlanetoftheApesGoldrush

Years ago when gold rocketed from $35 to $150 plus an ounce there was no ‘gold rush’ and it hardly caused a ripple. We saw no real increase in mining activity and l dont think it will make too much difference now.

Only the locals I’ve seen on the rivers and creeks where I’m at .

I had 4 or 5 blokes ringing up end of last season to go dredging but nar no thanks not at $100 a gram ! , panning or sluicing is a different story , theirs a few dredges been cruising around on trailers too so il be keeping my eyes open this season , i think with the covid thing going on some will have it in mind to go find some gold , interesting times .

waz it that low bk then

Hi John - I could not agree more with all you say. I am guessing that the foreign bankers have encouraged us to borrow money more than ever recently - where did the gun buy back money come from, where did all the covid relief money come from. We cant pay it back and I know that big business calls the tunes. I suggested this to David Clarke and he gave me an answer which definitely affirmed my suspicions and my sister was told the same by Winston Peters.
I am bloody sure that the foreign devils not only call the tune but are the ones behind us losing our recreational mining rights. I believe that Oceana gold goes to the Rothschilds and probably in return for them investing in the Macraes mine. Hinting at this read para 7/8 http://nzresources.com/showarticle.aspx?id=3455&gid=30003455
At the moment I cant find the reference I wanted but it stated that Rothschilds buy the gold.
In any case that gold belongs to us all and the government is selling us down the drain. If the government tried to borrow money to put into oil or gold then I bet the international bankers would refuse because THEY want it.

Here is an article about the Blackwater Mine reopening with the help of $15 Million from the Government.
https://www.stuff.co.nz/business/industries/118183370/gold-mine-to-reopen-near-reefton-with-the-help-of-15m-government-loan?rm=a.
And http://www.confer.nz/ausimm_nz2018/wp-content/uploads/2018/10/15-MarkAUSIMM2018_day2.pdf