Hunt #10
Nice grubby little bay, ignored by todays more fussy folk. Consequently virtually no (modern) junk. Remains of some hefty 19th C Puriri pilings poking out of the sand got some serious coil time with good results. Driven off the beach by the heat by 9am.

Finds of note, another George 4, first of his silvers for me. 1825-29 shilling. Nothing for years, now I’m ‘swimming’ in G4s! Just need to find a less tatty one now. Silver bracelet (hollow) only good for remelt.

Handful of interesting coins I can’t ID, some have patterns I don’t recognise so looking forward to seeing what they are - especially given the associated G4. UPDATE: One UK decimal ha’penny (haven’t seen one of these for a while), two 1925 shillings, and a ‘slick’ silver probably once a sixpence.

Two shots, fresh out of the bag, and after a quick clean and dump the trash… 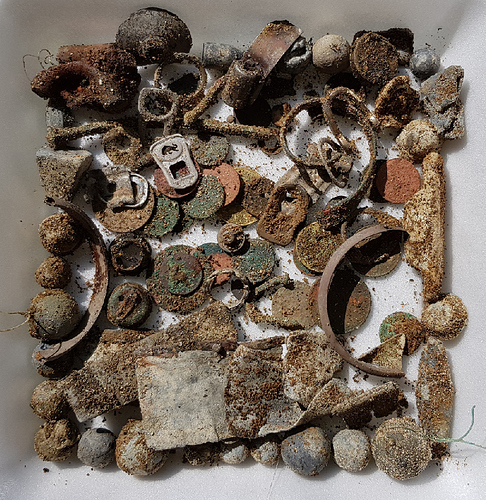 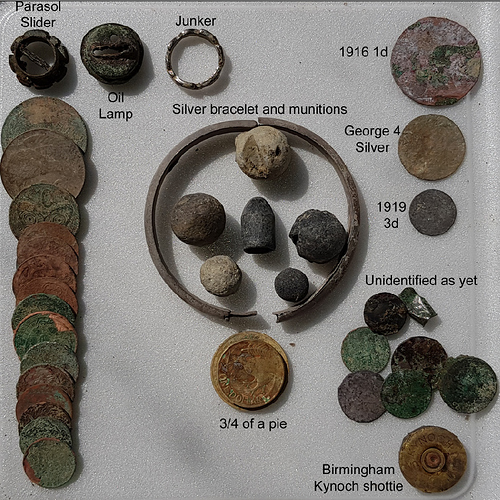 Invented a new rubber-based, high speed metal detector on the way home too… 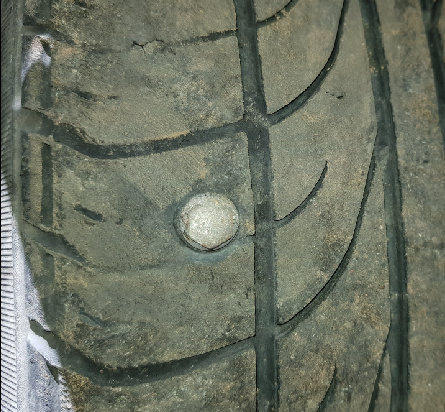 Now that’s what I call an interesting dig. Gets the adrenalin going MW. Well done.
HH

Looks like fun - you, musketballs and Roy make me jellyarse.

Waow well cool. May not try your rubber detector but luv the historic finds thanks for sharring

You certainly have interesting spots up there with lovely goodies that are far more prolific than down this way! Great hunting and keep up with your photos!!!

Ceremonial emptying of the bag: 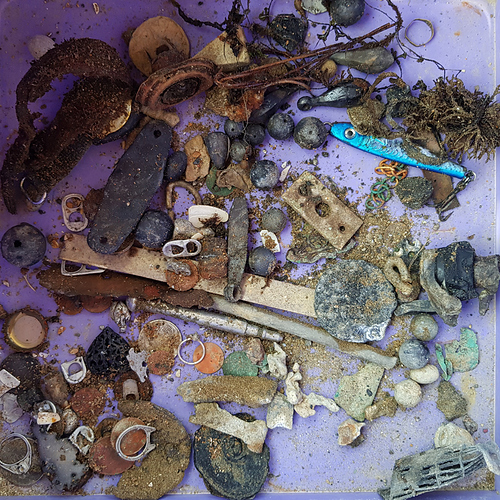 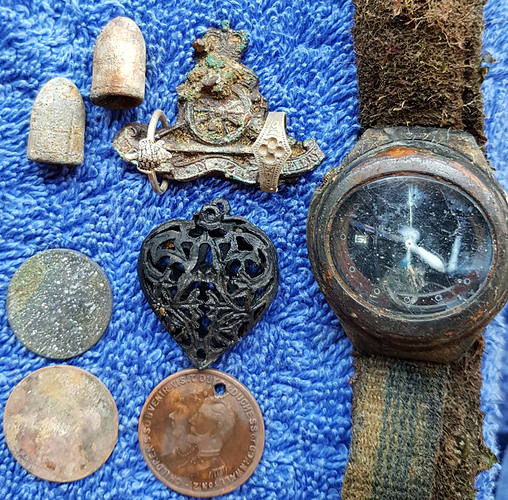 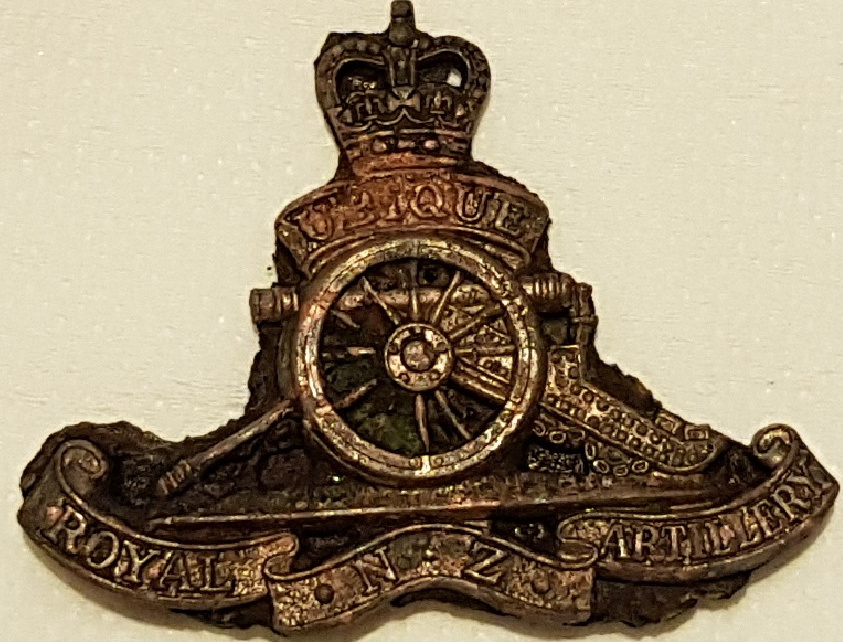 Theres sure a potpourri of stuff there - I like the fishing lure and the Ticken tocken time clocken…and is that a NZ Artillery badge - love it. I paid fifteen each for four different Artillery ones at an auction the other day.

Yours are probably in better nick though

Fishing lure nothing special, recent loss as hooks only just starting to turn. Fair honked in the phones though.
Surprised the watch was there, was lying on the bottom in knee-deep clear water right in front of a motor camp - maybe kids don’t snorkel as much as they used to?

your on to a great site…

@Mudwiggle,Thanks mate may have finally found what this is 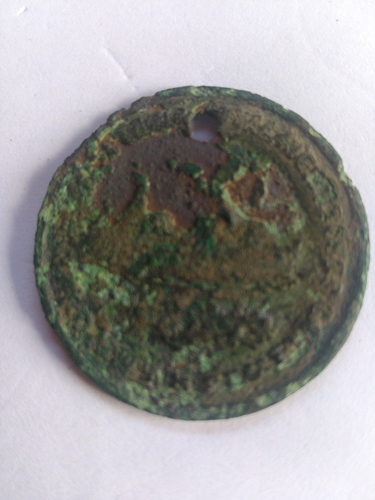 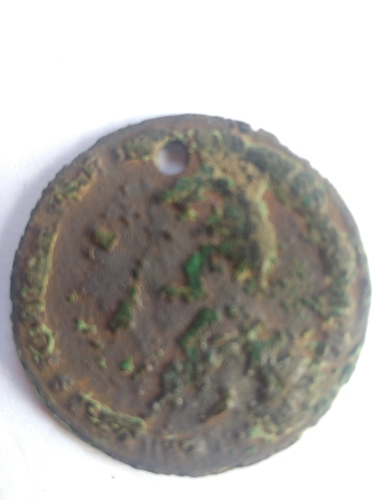 Hunt #12 - Wading from 0300 to 0900Hrs, Accompanied this morning by Maurice, a juvenile Eagle Ray about the size of a dinner plate, who followed me for about 10 minutes to make sure I hadn’t left any munchies behind in the silt.
Emptying of the bag… Minus one large item which will make an appearance soon. 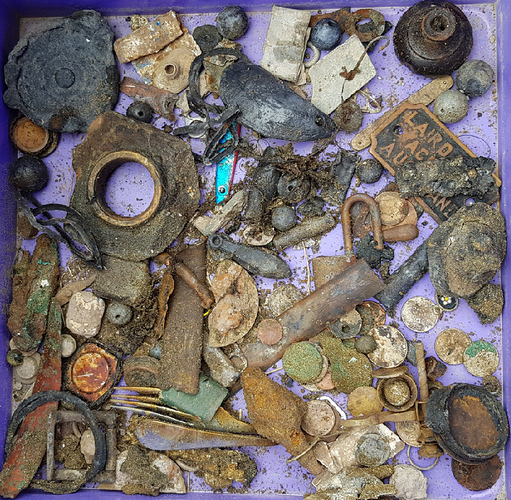 And after sorting the rubbish, before cleaning. Bulk of the pennies are early 1900s, Two small silvers, Vicki and Ed. The scissors were a progressive find over about 10 metres. 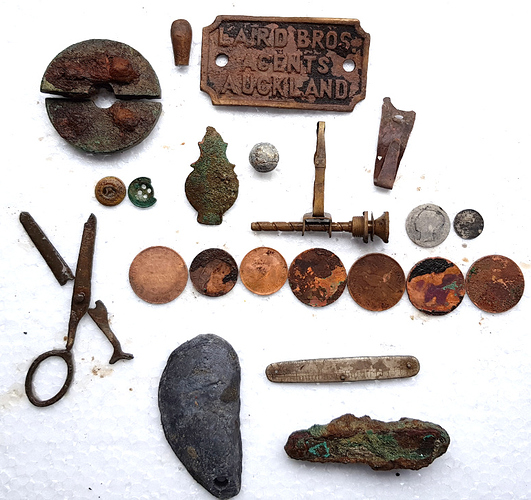 Any ideas on the screwy thingy? 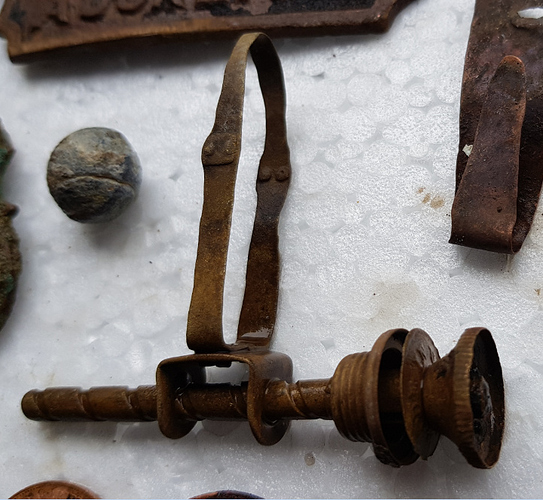 Now, this has me a bit excited, has non-ferrous notes in there too…: 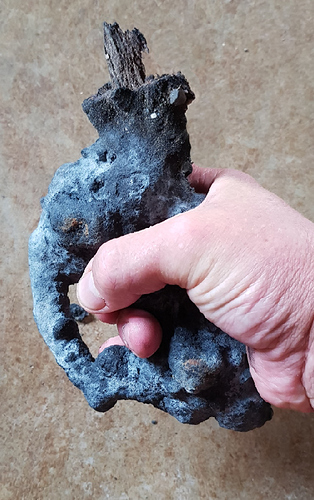 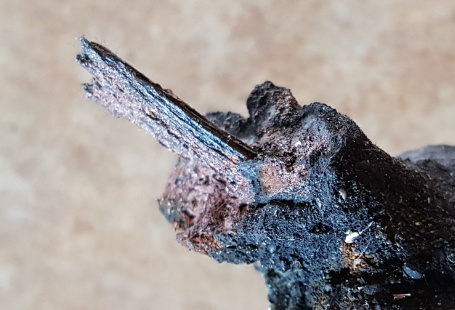 Did also have a chunk of pitsaw blade, but was too heavy to lug around, so let it lie.

Stopped for a door knock on the way back, granted

Four generations of family, but not a single coin??? Sea of leadheads and iron.
Gingerly had a poke around inside, whilst trying not to go through the floor, or have the roof come down. Found some lino in the kitchen, always lift the lino! Got most of a 1947 Northern News for me to read this evening

Hi MW
That screwy thing could be a paraffin lamp wick adjuster.
That sword handle looking thing would get my juices going if I found it. Keep us in the picture as to how you go with it. Congrats.

I’m sending the ‘thing’ away to the pro’s to get done. If it is an infantry sword hilt, can’t afford to cock it up. Wick adjuster is about the only thing I can think of, but they generally don’t have a finite movement, usually the spiky wheel design. Another option could be a “focussing” mechanism of some description?. Made in USA stamped on it.

sword blade looks like a cutlas there be pirates on that beach,

thought that sort of sword would come from a mounted soldier.

Hunt #13 - Went for an early morning dive in my local swimming hole - Unfortunately 3/4 of it inaccessible due to explosion of weed growth with the weather… Only found out after lugging all the gear in, so jumped in anyway. Very quiet, lots of trash as usual, one inquisitive nibbly eel and a LoveLock.
Not going to give any details on that due to the message on the other side. Suffice to say it’s still down there, in a spot safe from future coils… Some things deserve to stay put. 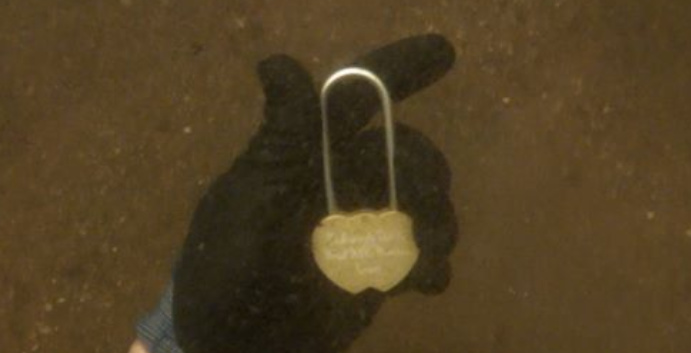