I thoght i would post some of my odball science projects - just in case peoples are interested in the stuff that a moistly retired man with endless scientific curiousity and a smidge of Asbergers syndrome does for funsies.

So let us begin. Clay has been a recent activity, collecting bits of it, suspending it in water, letting the sand n silt settle out and pouring off purified clay. Then i flocculate the suspension with 2cc of milk per liter stirred into the suspension, followed by a simalar ammount of saturated aluminium sulphate solution, causing the clay to clot and clump together(flocculate) and sink
to the bottom. I add paper pulp for extra tensile strength and plasticity and sometimes some (bentonite) clumping cat litter if it lacks plasticity. i add a little organic matter (flour or sugar and a smidge of fixed nitrogen) and let the microrganisms colonise it for a week or four, which seems to improve the way it handles. then i do some pottery - See below, from my “cartridge in a bare tree” posting on my coil swingers/show and tell/todays wasteland finds. 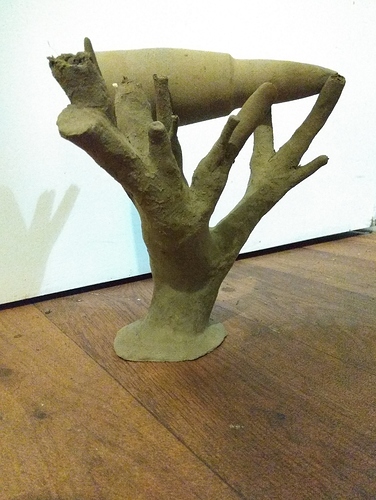 Todays other thing.
We had a 2 liter of milk which went slightly odd, it kept threatening to clot every time i steamed it for coffee. So i ended up adding hot water and a litttle vinegar and making cottage cheese/casein. Here is a photo of it drying… 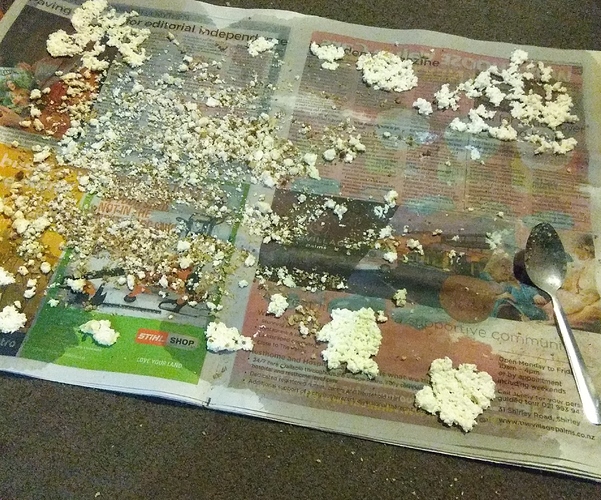 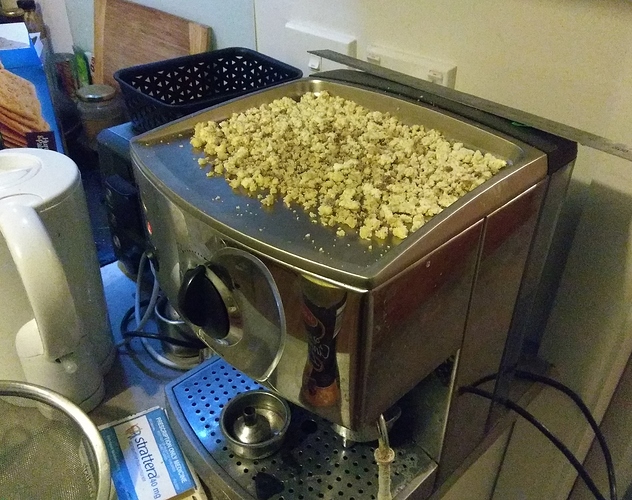 Be interesting when you get around to speaker magnets and black iron sand, then hook it up to music…get some fantastic patterns!

Here is the flocculated clay being de-watered.
Upper container siphons into middle one through the tubing when level difference is enough to overcome the resistance to flow. Middle container has rolled up chux multi cloth draped over its side and paper towell on top of the floc. The Floc settles down in the middle container while clear water rises to the top where it soaks into the paper, along to the cloth and over the edge, dripping off into another container below, resulting in combined filtration and siphoning through the cloth. In a few hours all that is left in the middle container is a thiner layer of wet clay, the consistency of soft buttter, ready to be dried and further processed. 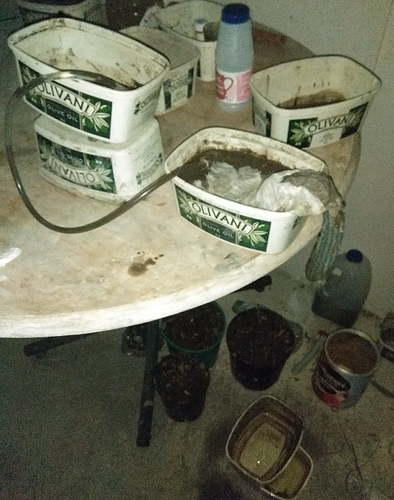 Here is my continuous Xun brewing system.
Xun or Jun is a chinese predecessor of kombucha, but made with green tea and honey instead of black tea and sugar. To this 8 liter jar i add 1.1 liters green tea sweetened with 100g of honey, and out of the bottom tap i fill 600ml coke bottles once or twice a week. After about 10 days in the bottle it is fizzy. Tastes vaguely like a milder version of vinegar, but slightly sweet and fizzy, just the thing after a few hours of detecting the wasteland on a hot summer day.
It uses the same floating “mushroom” combined with acid tollerant yeast as kombucha, the mushroom is formed by mother of vinegar growing on top making acetic acid aerobically from sugars and alcohol while the yeast live at the bottom and do a normal fermentation. 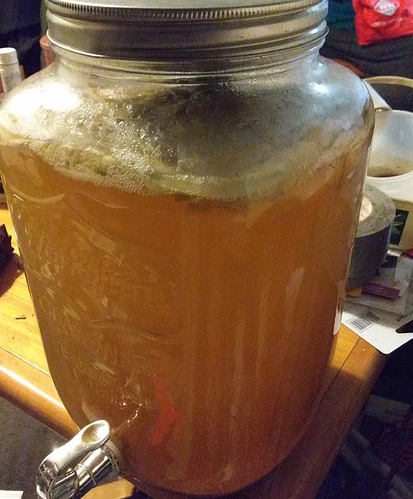 Could you draw me a diagram? Of the black sand derangement with the loudspeaker coils?

This is similar to what I was meaning… he is using a flat plate as opposed to an exposed stereo speaker whereby you put about a spoonful of magnetic iron sand on it.

As a side musing, I wonder if Cymatics would help in the separation of black sand from fine gold ??? Give those down south something to play with.

Black sand is fascinating stuff, mostly magnetite, Fe3O4 with 2 Fe atoms at 3+ (oxidation number) and one Fe at 2+. It is very good at getting into your smartphone, speakers and any other unsealed electronic device containing magnets. I used to be a CNC laser cutter and when you cut steel with oxygen, magnetic dust goes everywhere.

I can vaguely remember about 15 years ago doing some study on steel habits by playing music to it. all steel etc did different things. brass, copper steel even tried black sand , but for some reason we stopped.(maybe when we started playing doff doff we got unwanted attention). it was more of a plate over a speaker and different filings jumped higher.

its still trendy to play music to vegetables, they play to me all the time. 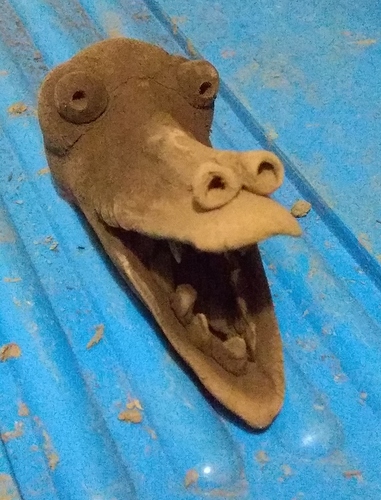 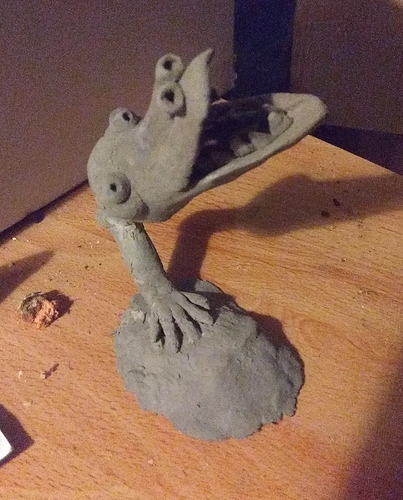 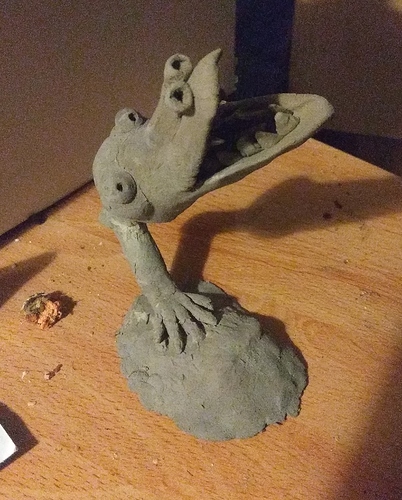 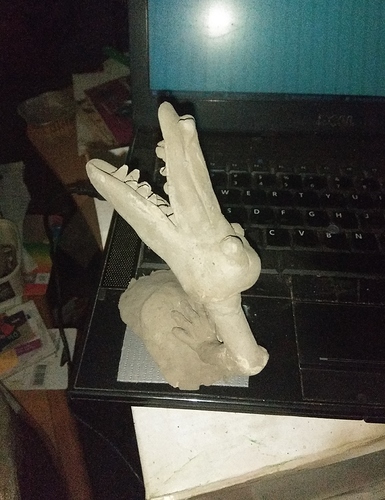 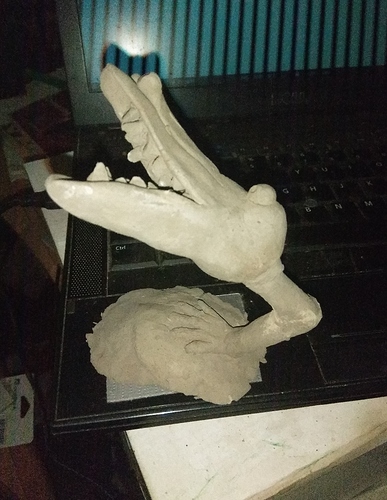 Dropped a fishing line into a parallel universe and caught this ? 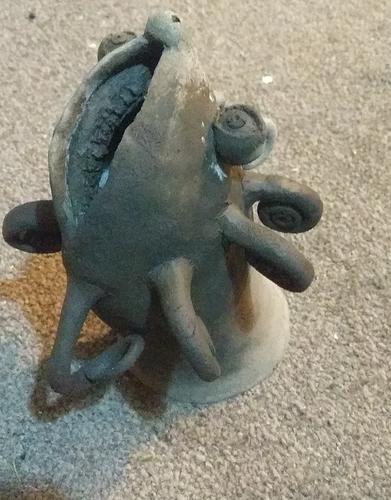 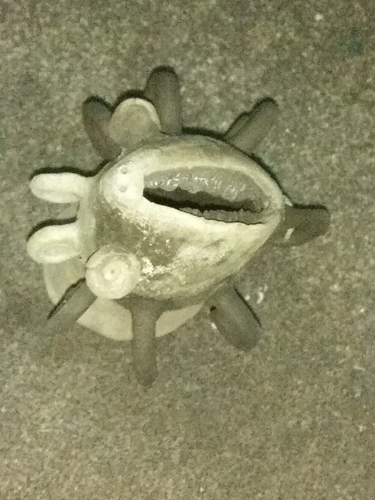 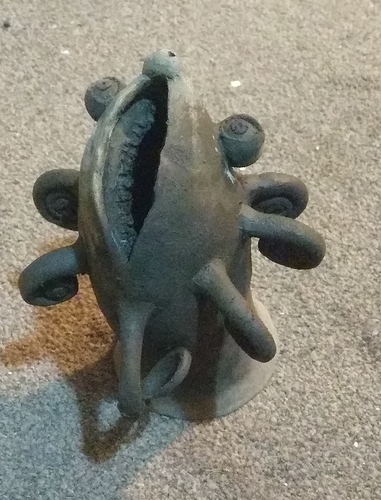 In space, no one can spear your bream.

This is my personal contribution to national biodiversity!

Or should that be bioperversity?

Ok, clay is wonderfull stuff made up of little plates of aluminium-silicon mixed oxides which form themselves into layers.
Feldspars form 41% of the earths crust and consist mainly of mixtures (or intermediates between)
K Al Si3 O8
Na Al Si3 O8
Ca Al2 Si2 O8
and other metal ions may also participate in the aluminate-sillicate soup.
These rocks crystalise from larva or magma in layered structures, each plate consisting of a layer of corner sharing SiO4 tetrahedra interlocked with a layer of octahedrons containing (usually) aluminium ions bonded to 6 oxygens and a hxdroxide group . A single plate consists of one layer of octahedrons interlocked with a layer of tetrahedrons on either one or both sides. When these rocks weather away, water slowly gets in between the layers and they separate into plates with permanently adsorbed layers of water between. This is why it takes a great deal of heat to drive all the water out of clay, and once the water is driven off (fired), the clay becomes waterproof.
In some wet clays the hydrated plates will end up as charged “giant ions” because the ability of water to pull off the odd metal ion is different (?higher) on the plate faces, as opposed to the plate edges. This means that the plate faces repell each other resulting in a pattern of face touching edge like this.

oh bother, that lovely pattern i drew with dashes and pipes does not display properly.

These types of clays swell up when they get wet and a small ammount of clay can hold a large ammount of water in a jelly like state. In pottery clay these types of materials are used as part of the mix to contribute stickiness, strength and stretchiness to the clay. Too much such clay makes it shrink as it dries which causes drying cracks if the drying is not uniform. In practice that means that wall thickness must be uniform, internal spaces need to be vented and drying must be carried out painfully slowly.

Interesting…Pokeno has yellow clay, white crumbly clay and the awful blue clay that I reckon has glue mixed in with it as to extricate anything out of it when wet is a mission! We lost a pin out of the digger and it was a fight to get it back!!! Another time the quad bike got “glued” in part of the drain. Hubby had to winch it out. Hard muck to wash off too!!!

Blue clay? Sticky and gluey ? Sounds like bentonite, a very useful type of clay. One interesting test is to take some of the wet clay and add or subtract water until it is of plasterscene like consistency, then roll a piece into a stick exactly 100 mm long and put it on a piece of plastic to dry, then measure the dry length. This enables easy calculation of the percent drying shrinkage. Not sure what the drying shrinkage of bentonite would be, but probably over 10 %
Nope, i tested it on clumping clay cat litter, which i think is bentonite, and got 5% wheras the clay i was using for my models was 10%

The while crumbly stuff seems interesting too, i wonder if it is kaolin - china clay