Very interesting Gavin - but for me too late.

I have read two reports of these micrometeorites being ‘discovered’ in New Zealand in rock formations by foreign Geologists and I always smiled as they had been discovered here in New Zealand around 1985 by me.

After serious flooding which scoured an area to bedrock which was exposed for the first time in tens of thousands if not hundreds of thousands of years I discovered them in rotting schist. Prior to the flood damage this schist was up to twenty foot underground, below peat…

I never knew what they were so a friend who is in charge of an electron microscope had them examined and somewhere in the carnage here I have the full report. The are called microspherules and are of extra terrestrial origin - micro meteorites.

One of them in particular was amazingly interesting because the electron microscope clearly showed gold GROWING on it!

They are mostly carbon based but are magnetic none the less.

Modern ones can be found as your report says - ya never know though - your roof might be covered in the highly radioactive remains of the fuel source from the nuclear intergalactic hyperdrive system of the last Russian - or American - galaxy probe which instead of getting 2.5 thousand light years into space came to an untimely end…above Gavins house!

The first ones I found I had analysed and then the second lot fell into the carpet and the ones I rescued I gave away to a micro mount collector. The third lot also fell into the carpet but I managed to rescue them with a magnet and sucky motor and then I finally learnt NEVER to take them out of the container they are in - until now! I took them out to photograph them for Paydirt - now I have to put them back in the container!!

They are supposed to be up to 1 mm in diameter but the biggest one here is actually 2 mm and by far the biggest I have ever seen. 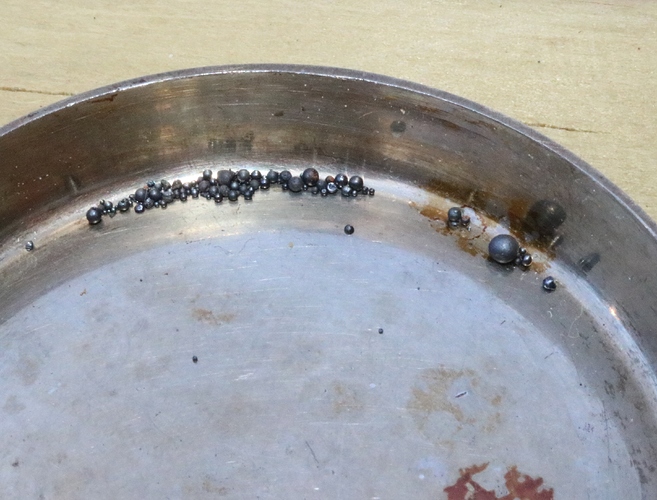 Amazingly round some of them and larger than I’d expect. I think you might have mini ones rather than micro ones

A bit of both I guess but still fit into the category of microspherules. If I could find the electron microscope report on them I would show it here including the photo of gold actually growing on one of them.

Very interesting indeed!!..so are they metal and heavy as ?..
.should we be looking out for them when we’re panning or detecting???
Pretty cool there Lammmerlaw…all I can really say is …“goodness gracious great balls of fire”!!..lol

Detector won’t pick them up. Mostly carbon based but I need the report to really give their structure. The report analysed then as largely carbon but they are magnetic. It is possible that some might contain nano diamond. To me they are fascinating and they were fun to find.

I believe I can just make out CAC stamped on one of them.

Nope to small and they magnetic and therefor eno CAC, Eley, Winchester, Kynoch or anything else in that line though funny you say that as the very fisrt ones I found I though “Hmm Bird shot” - but it had to have come from that era that pre dates history! BC goodness knows when! They are also magnetic and some are irregular in shape so nope - they are the real deal. I had thought of putting some onTrademe.

I would be interested to do an elemental analysis on them for you. Just need one or two (smaller ones, but not microscopic).

Cripey what’s an elemental analysis…I have a fully report which analysed them and it spans many pages…I am tied up for a few days and sadly it’s nilot B & D but if you want a couple then your welcome. Let me know your address and Bobs your Uncle. Will be the smallest packet I have ever sent!

It’ll tells you what elements are in the wee buggers, iron, vanadium…gold, alien space plagues, that sort of thing.

Can get by with two, but the more the easier.

The reports from the electron microscope detail the full make up and tell all the materials in them plus quantities but if a couple or more are of interest to you personally then you are welcome to a couple or more…I would not require them back.

SEM or TEM wouldn’t ID the materials though unless there was a definitive crystal structure. Hold fire on sending until you can find the report, I wouldn’t mind a read first.

Thanks for the generous offer of a couple, although to be honest ‘space dandruff’ wouldn’t really have a place in my collection now. Gave up rocks years ago after about the third house move and the eighth hernia.

When I do find the reports where ever I put them then you are more than welcome to a copy. If you saw my place then you would understand how I can’t find them! My place looks like an Opium den after a Police raid.

Interesting. I’ll hang onto any corroded BBs I find next time.

There’s even a book about finding micrometeorites…

On the Trail of Stardust - The Guide to Finding Micrometeorites: Tools, Techniques, and Identification