Hey guys, first time posting and looking to get into prospecting as an occasional hobby and want to make a river sluice. Just unsure about a couple things.
My current plan is to use an aluminium U shape, 1m long by 20cm wide. Where could i find/make such a piece?
Second is the gold recovery system- was thinking rubber V mat for the back 80cm and Expanded metal and welded riffles (just like in the pic linked) over the back 60cm.
How would that work as a design, i can put up more in depth pics if it would help. also wondering whether the front end needs to be widened for low water flow or if a straight 20cm wide all the way would work.
Also, would rubber V matting work better than miners moss or ribbed carpet?
And is this more trouble than it’s worth or should i just buy a cheap keene one. 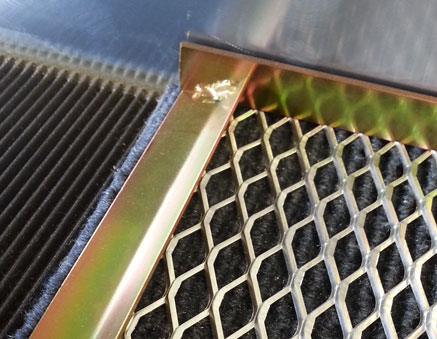 It’s the kiwi way . I would have a go at making my own, if I did it again, not to save money but for the satisfaction. After all they just use to be wood

Dont buy. Make your own. If you see a design you like then copy it. In slower shallower water I like the flared front to increase water flow and pressure. A detachable flare is a good edition.
I did everything on the cheap and it was all effective.
You can save hundreds if not thousands of dollars and do just as well as someone with the latest gear…remember that many of the claims about the best matting etc is all advertising propoganda and is not necessarily better.

Presumable make you own out of sheet metal. Have a look at designs and ‘steal’ ideas and know how then gets a sheet of Aluminium from Ulrich maybe or a sheet metal dealer or even nose around the scrap yards - if in Dunedin go see Tom Reitveld, Reitveld engineering and see what hes got…you will never get a better deal. He might also be able to cut and bend it for you so that you get top quality at a better deal than any where else.

$60 +postage for a mini sluice on Trademe
Building something will take far longer that you will estimate & you’ll run into many unseen irritating problems (trust me I’m an expert!). However you will learn many difficult lessons & gain valuable knowledge.
Alumium will not be very wear resistant, if you plan on throwing a bunch of rocky gravel at it. Though a good choice if you want to hike with your sluice up some hills into the back country to a super secret spot with rich soil.
You could put some stainless mesh over the top to eliminate all but fine gravel, this wouldn’t add too much weight & would be wear resistant - make it easy to replace if it ever gets damaged.
You could drill holes in the Alu to catch the gold - completely bipassing the need for matts, though this could be easier or more difficult to recover your winnings.
For scrap Alu go to you local recycling depo, or scrap yard.

Do you mean a horizontal U like the hairpin bend in a river?
(Just had a coffee, I’ve some scrap Alu making mini mock up back soon!)

Two of the first half dozen underwater dredges inNew Zealand and which were owned by my father and his brother are still prefectly usuable to this day nearly sixty years later and they were used virtually every weekend through the latter half of the 1960s through to the mid ninteen nineties. The aluminium dredges never wore out but our sheet steel one was the worse for wear and rusted out.

The only aluminium dredge we had which died was because I had it on top of my Landrover and forgot it was there when I decided to see if my Landrover could pass beneath a large overhanging branch at one oclock in the morning at Macetown, New Years celebrations, about 1974. I was slightly drunk - the Landrover made it - the dredge didnt! Oops!

Aluminium will be excellent.

Here are my current designs, 1m long by 20cm wide. Flared at the front by bending down the sides 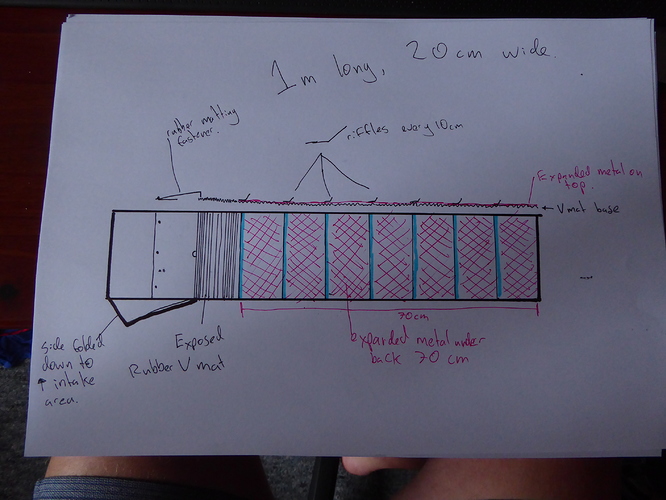 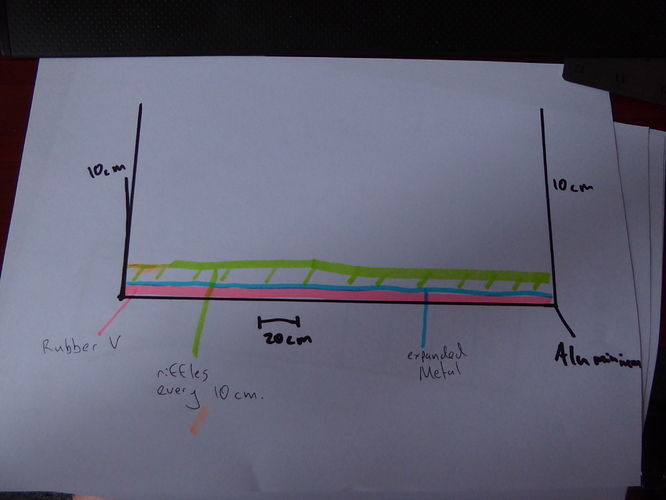 Too bloody right oldtimer!. 12 months ago I brought a new keene 3 stage 4". I lasted 4 weeks before having the whole box ripped appart & re built in greymouth. Never again. Keep it simple. & cheap.

I like the fold out exit flairs. Will add that to my prototype… 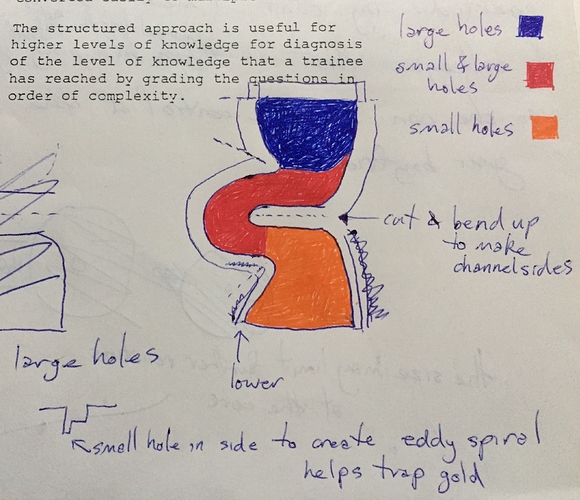 so this design tries to emulate the natural water currents so gold collects in behind the corners?

You’ll find 100mm is to high for the sides. 70mm is about right. Easy riffle system is rondo angle from builders merchants just bend it to the desired angle you want and rivet a heap together. Design looks good though, bent flair should work fine if not just heap big rocks in front of sluice to control water flow. I suggest using miners moss type mat, use a small bit of deep v rubber on the front to give you a clear indication if you get colour. Old roof and cap flashings are u shaped if that’s what your after, council tip is great place for metal, I picked up a whole 3mm aluminum sheet 2meters long by 1.2 wide for free

That rondo stuff is just what ive been looking for, thanks.
Would the miners moss be better for the whole system then? i thought V matting would be easier to empty and miners moss could get clogged easier/ quicker and harder to get small bits out?
Any suggestions on how to bend the sheets into shape?
Thanks

I did mine in a similar way rowmoney but I just used carpet as mat and drilled a couple of 10mm holes in the feed end that I bang rods thru to anchor it. works well

I would use moss for 80% of the box, the very front use the v mat but purely as an indication, gold will jump out of it when flow changes or stones get stuck on top, half the trouble with rubber is it displaces any trapped gold easy when an object sits on the mat and causes turbulence, with moss it’s the opposite gold gets pushed deeper down, it rarely clogs up as the gold is much heavier than other debris and works it way down. It is sometimes difficult to clean out that’s why it needs to be removable, bash it out inside a bucket and you’ll be fine. I’d rather it a pain to clean as it’s one less thing to worry about.
I’ve a Keene sluice with “miracle” rubber matting, never again will I buy Keene stuff I see gold all the way to the last riffel. I presume the miracle is actually getting gold!
The easiest way for me to fold sheet metal in my garage was to clamp the sheet in a vice sandwiched between 4x2 timber then slowly beat it over with a mallet along the length. It turned out really good except it leaves a slight radius in the bottom which makes it harder to get the riffels to clamp the mat nice and flat, the more time spent hammering the bend the better, may be better sandwiching the sheet with angled steel instead of wood!

There are many different designs and everyone who owns a particular one will swear by it. I actually used side height of about 200 mm and found it ideal but of course normally that was not needed and it did make it heavier.

You can get a good idea here of what might be best for you…or which you like the most, or find easiest to make.

There are many different designs and everyone who owns a particular one will swear by it. I actually used side height of about 200 mm and found it ideal but of course normally that was not needed and it did make it heavier.

You can get a good idea here of what might be best for you…or which you like the most, or find easiest to make.

I’ve seen some homemade metal benders and they look kinda expensive to make so i may just use the mallet method if i cant find a pre-made size.
Would you recommend minders moss over the top of V matting or just use a bottomless miners moss as the base?

You could mark your bend with a vivid the scour the line with a drill - this will give the Alu a guide to bend on.
Use a plank of wood for a steady even fold. & clamp in vice with wood on either side like the others said, or just stand on it and push down.

Goldpandemic’s suggestion is a good one as I use it with refinements as I am a perfucktionist - I clamp two bits of four by two along the line. I do not score it or weaken it to bend at all though. I then place another piece of four by two on top of the outer one and clamp it if possible and otherwise hold it then get son or helper to hit it three quarters of the way along while I hit it at the same time halfway and three quarters of the way along to the other end - when it is bent I then flattwen out the roundness of the bend. I also have a long surface plate of 1/4 inch steel that I can clamp sheet steel and aluminium to - it has to be really tight - and then a length of railway iron and place it on the outside and keep hitting it until it is bent into shape…and all free.

A bit of initiative and faith in your own ability and you can do anything - anything is possible except striking a match on jelly!