Gold - then and now

Some gold finds from my family claim days and some from my metal detecting today.

Not so long ago my son claimed to have discovered two gold reefs using my Minelab Xtreme. Initially l didnt believe that he could have discovered an actual quartz reef but then he produced a handful of samples.

This is one. The gold in this sample would weigh a good penny weight even though it is quite filigree like.
The reef itself, which l have been to is very hard but samples in it are quite numerous, unusual for Otago gold. 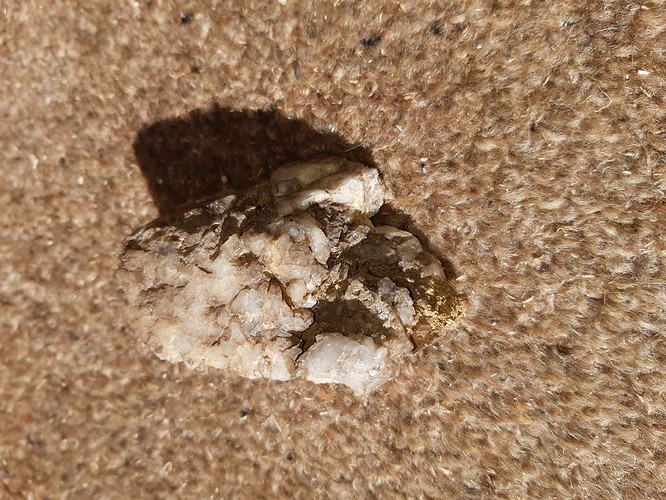 Careful, You will start a gold rush. Was that chipped from the reef or just a floater?

How was the Coromandel?

Yes it was chipped from the reef. If your a good boy we will walk out there one day but its further than l walked when l headed out that way last time with a certain friend of mine.
In fact we only got to a creek where he lay in the grass dying and only found a few bullets from the Maori Wars and the reef is another 1k away across country.

Loved the Coromandel but have come back into Auckland. Lost my blasted glasses in the surf when l got dumped coming in. I was going to take fishing gear out that evening but with only my spare glasses didnt like to take the risk of getting dumped out of a kayak again.

Was going to go home today but want to visit another couple of friends and catch up and visit book shops looking for antiquarian books especially books on scows, local histories, Maori Wars and Coro gold.

Nice specimen. Over the years I did have a bit of a collection gleaned from creeks around Reefton. Sadly don’t have it now, most likely lost in one of my many moves. Years ago when I was in Hamilton. Did a bit of rock hunting up the Coro. Like my quartz specimens also missing in action. Still a few snapper, gurnard and Rig (Lemon Fish) being caught around here at Westport. That’s one of my other hobbies. Surf casting, Drone Fishing and Kontiki Fishing. Actually have a bit of a squadron. Four drones all up. Why four. Well I am a bit like JW and his Detectors, you can never have enough lol. At the moment I am experimenting with creating replica quartz specimen’s, I prefer to call them "Replica and not “Fake”. Have replica Nuggets conquered. Will go public with them in the not to distant future.

The closest l have come to a drone is me - my wife said that l ‘drone on’
Regardless of that l want a large drone with a long range for poacher video recording. A friend had one ip at my place and sent it 3k out and got some photos of a poachers vehicle from just a few feet away - marvellous things. It might be one called Matrix Ace that m was keen on.

As for fishing - yes sir that’s for me. Love my sea fishing. For pocket money dad and my uncle used to make all the surf casting rods and stinkers sold in the Dunedin sports shops and got paid in fishing gear, guns and ammunition.

I haven’t caught a snapper yet. Its blue cod down Otago way.
Henry, my gold mining buddy and great friend made some replica nuggets and put two bottles on the window ledge up at my place jn the hills. We joked about how long they would last there and sure enough sone low life whom l allowed to stay there stole one of the bottles. Worse still my nephew had been putting course into three bottles and leaving them on the window ledge as well - maybe a oennyweight all up. He was killed tragically at age 19 so l left his gold there as a sort of memorial to him - some one thought they had more right to it and stole it. Such is the nature of scum.

Trev, Why would you want to make replica, fake, gold specimens?

Henry, my gold mining buddy and great friend made some replica nuggets and put two bottles on the window ledge up at my place jn the hills. We joked about how long they would last there and sure enough sone low life whom l allowed to stay there stole one of the bottles. Worse still my nephew had been putting course into three bottles and leaving them on the window ledge as well - maybe a oennyweight all up. He was killed tragically at age 19 so l left his gold there as a sort of memorial to him - some one thought they had more right to it and stole it. Such is the nature of scum.

Imagine Graeme if you had a trail cam set up inside & caught the bastard red handed. To think you gave them the privilege of staying in you hut up there & they go & do that. They are more than just Scum. You must of had an idea of who it was unless there was a group of them. Obviously just too much of a temptation. Just takes one arsehole.

This is from my ‘good old days’ in the Arrow. January 1977 or at latest January 1978. My uncle Charles Thomas and myself up the Arrow one day. In an hour to two hours we got six ounces. This is all have left now as l gave samples away and swapped it for things I wanted.
I kept one ounce. 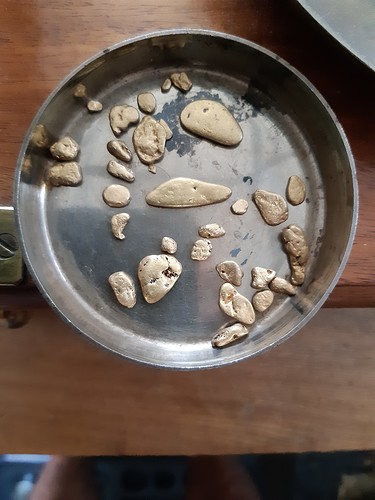 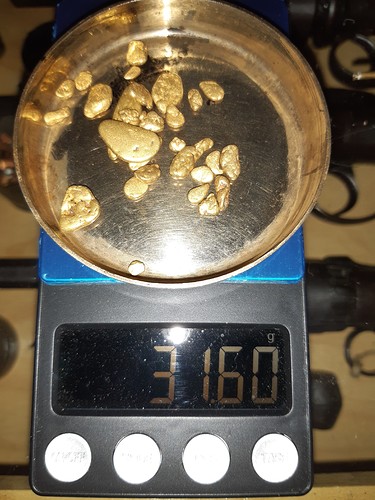 Yum Yum. Now that is a lovely sight.

Good question JW. I did think of maybe cornering the Nigerian Market, but they have that pretty well covered. Plus I don’t want any Nigerian Hit Squads a come knocking on my door. Nah, just kidding. Have few idea’s I may or may not pursue. More on that later. At the moment I see it as a challenge, and I just love a challenge. I have all the melting and casting gear and might even dwell into a bit of jewelry making. Who knows where I may go, not even me. Don’t worry I won’t salt ya ground, now that would be cruel and I don’t want to be the main attraction at a lynching.

Cheers Trev aka “The Mad Alchemist”

Are you interested in scows out of Tasman Bay. When I was a kid the scows used to come up from the south and moor at Petone wharf in Wellington harbour evry 2-3 days. In the 60’s my father would pick up fish sent up on the scows from the Tasman Nelson areas. Back then the Fishburns from Drydens Bay in the Queen Charlotte Sound would sail across to Paremata if they caught a big catch and we’d go out ther and pick up the fish. I’d always try and get in the punts which ferried the fish from the boats to shore. Otherwise, it would come across in railways wagons on the ferry.
Later on in the 70’s I used to try and catch trips down to Fiordland with my fathers skippers in the school holidays as the fishery for longlined Bass opened up.

My grandfathers family owned scows operating out of Freemans Bay. Yes they interest me. There is one down at the Catlins even now - the Portland. 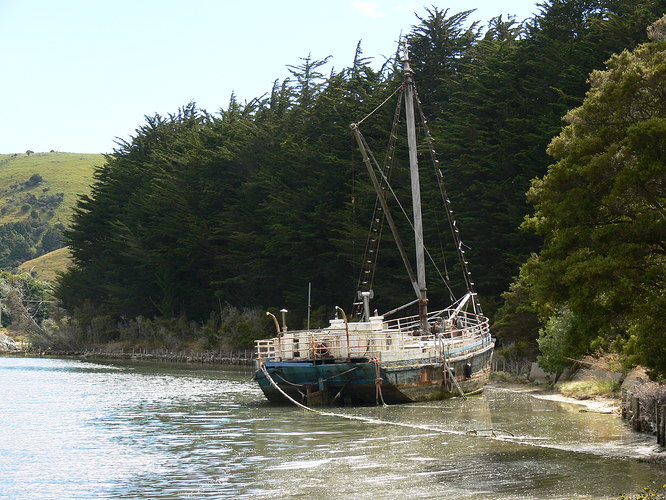 the Portland used to sail into Petone in the Wellington Harbour.

Here’s the remains of the scow “Kohi” in Westhaven Golden Bay. You pass it on the way to NZ’s Forgotten Goldfield. Built in 1911, purchased by the NZ Navy in 1942 to deliver military cargo in the Pacific, sank at Picton 16/7/1962 then pumped out and taken to Westhaven for use of a freezer.It’s had an interesting life. Quite a few of old photos on Mr Google. 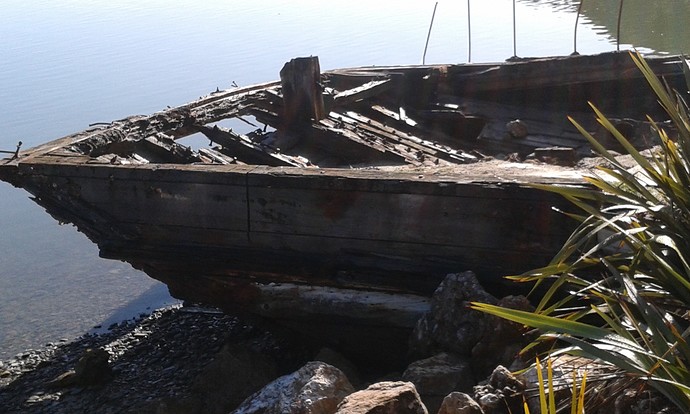 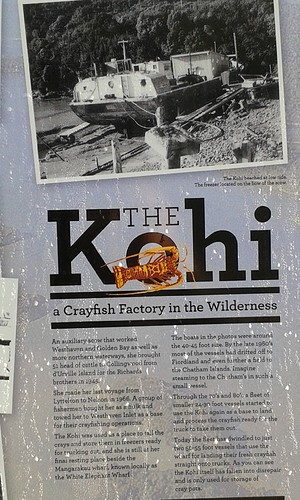 First day out a year or two ago with my Gold Monster paid for itself in one day. I gave half the gold away but this is 27 grams l think.
The two largest are 4 and 5 grams. 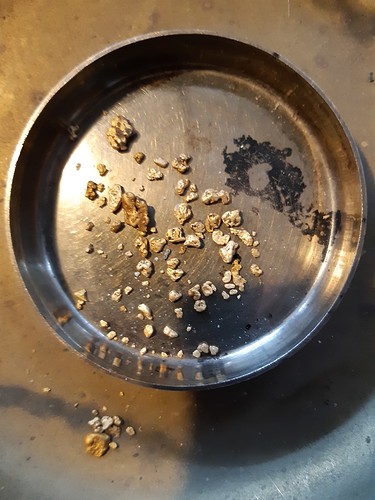 Wow! Thats some haul. Just bought myself a gm1000 off trademe. Only been used a couple of times, so as new. Can’t wait to get into it next summer.

It’s a great detector and l would thoroughly recommend it.
In fact l am a bit like the woman back in the old days who was so impressed with the Model T Ford car that she bought three of them! I am thinking of getting a second Gold Monster despite having a number of other detectors.

So you are the bugger that got that.

I came so close to hitting the Buy Now as even that was a great price. You wont regret it, depending where & how you use it.