Floating Gold - A Natural (and Unnatural) History of Ambergris

A recent find reported in the news…

A golf ball-sized lump of what is thought to be prized ambergris could be a Dunedin beachgoer's ticket to getting on the property ladder. 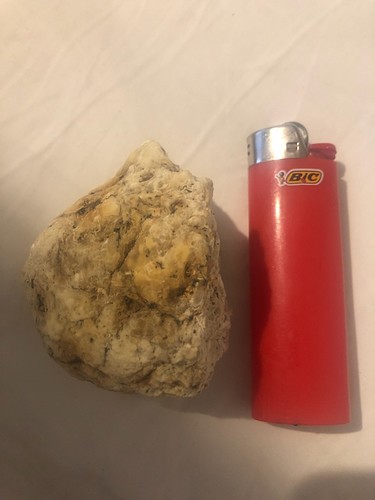 I’ve been looking for that stuff for years. Im up in northland on the eastcoast and whether through ignorance or its just not here I don’t know but we’ll done
Can I ask what’s a piece that weight worth

Don’t know the price, seems to vary a lot.
Once we had the genuine piece to compare it to it became alot easier to find.
You have probably found it and thought 'nah" and chucked it.
Similar size and quality chunk went for $360 on trademe recently 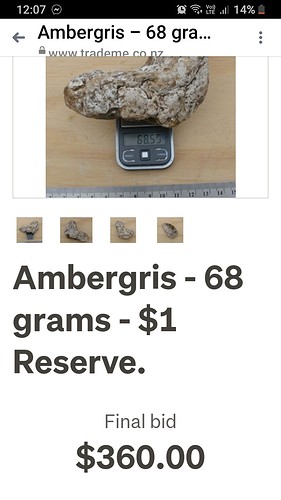 Also be very cautious who you give money or ambergris to. This stuff does worse things to people heads than gold.

15 posts were split to a new topic: Uranium in New Zealand

A post was merged into an existing topic: Uranium in New Zealand

will steer this back on the right topic…An old girlfriend of mine(she was not old but this was a while ago)took me to her family crib at Bull Creek, it was located very close to the coast and was starting to suffer the effects of the rising sea so her dad started to build a new sea wall to which the DCC took exception to resulting in a $10,000 legal battle over it’s construction…inside the crib amongst the collection of flotsam collected over the years was a strange mottled waxy blob on the shelf about the size of a large elongated potato…I picked it up and asked the father if he knew what it was to which he replied that he only picked it up many years ago because he had seen nothing like it and thought it was unusual so picked it up…well I told him that I think it could be Ambergris and he should have someone look at it and to keep it in a more secure place. That day I had glued a four leaf clover to the wall(true story) this I have been told worked very well as the DCC stopped its legal action over the wall…my girlfriends father sold the strange waxy blob for I think a few thousand and built a new sea wall with the money