Article from US Archaeology Site 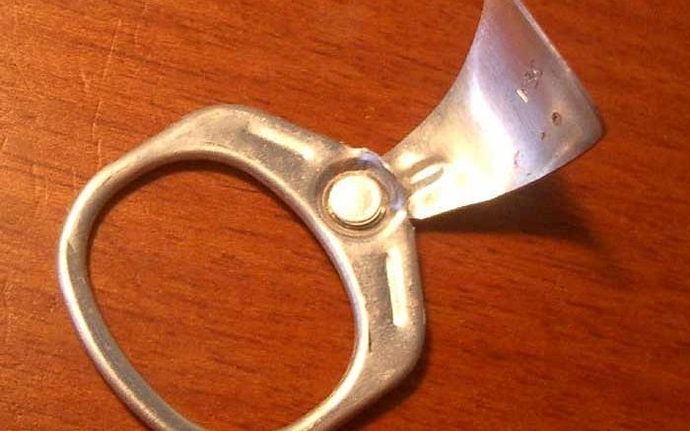 A simple relic of 20th century life has taken on new meaning for archaeologists: The ring-tab beer can — first introduced 50 years ago — is now considered an historic-era artifact, a designation that bestows new significance on the old aluminum cans and their distinctive tabs that are still found across the country.

“Once an artifact attains the 50-year threshold, it is eligible to be recorded as an archaeological site or an isolated find in most states,” said William Schroeder, an archaeologist with the firm Reiss-Landreau Research in Yakima, Washington.

“This means that even beverage-can pull tabs are eligible for protection under state and federal laws.”

Schroeder discovered that this year marked the golden anniversary of the aluminum ring-tab while investigating a modern midden of beverage cans in Washington State.

“I was tasked with a small survey near the Cle Elum Dam in central Washington,” he said.

“I encountered a small refuse scatter. It was full of beverage cans and bottles, some plastic oil quarts, et cetera. The cans were vintage, but I had no way to know for certain in the field whether or not the cans were historic — that is, 50 years old or older.”

Eventually he was able to discern labels on some of the cans that dated them to 1968 — not quite at the half-century threshold.

But the project still pointed out the need for a resource that archaeologists could use to date cans and their leftover tabs — which tend to be found more often than the cans themselves — and in turn help determine the historic value of sites where they’re found.

“Many folks have something of a fascination or passion for old beer cans, yet few had any knowledge that there were different kinds of openings, or that there was a way to tell the age based on the opening style,” Schroeder said.

After doing some research, he was able to find a comprehensive history of the American beer can — published by the Society for Historical Archaeology in 2009 — and then track down photographs of most of the known styles of tabs.

Schroeder then put this information together in a “key card” for archaeologists to use in the field.

Along the way, he found that, although other iterations of the pull tab were briefly used, the best-known version had reached an important milestone.

“They were typically teardrop in shape, with some having rounded distal margins, others squarish … the big difference being the ring top. The early models had solid aluminum tabs, no hole, no ring. That distinguishes them right away.”

The ring-tab design began to be phased out in 1975, after injuries were caused by people swallowing the metal tabs. It was replaced with a new modification called the StaTab, which used a flange of aluminum on the lid as a lever to press down on the sealed opening, a design that’s still in use today.

These small changes in design can make a big difference, Schroeder noted, because the ring-tab’s new status means it can be used to identify sites that may have historic value.

“If pull tabs are dismissed, it won’t be the end of the world,” he said. “But it’s our job to stop and consider these as artifacts and decide how to proceed.”

As an example, Schroeder cited a site that a colleague has been investigating in Washington: a campground that became one of the first major meeting places for the gay and lesbian community in the Northwest in the 1970s.

“The site may well be eligible to the National Register of Historic Places as a Traditional Cultural Property,” Schroeder said.

“Yet all that remains are camp pads, fire rings, and pull tabs. So, theoretically, the pull tabs may be the only way to place a temporal frame around the site, as none of the features will reveal specific enough age or date range.
“This is useful.” 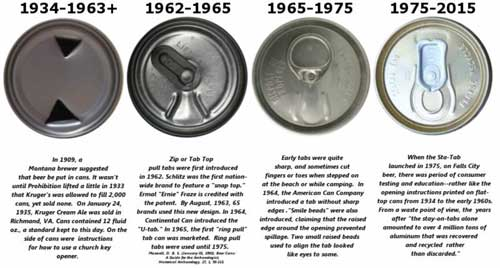 Schroeder stresses that the mere presence of 50-year-old ring tabs doesn’t automatically endow a site with protected status. And in some states, the age threshold for historic significance can range from 45 to 75 years.

But the 50th anniversary of the ring-tab is just the latest reminder that once-forgotten bits of material culture are constantly taking on new meaning as they age, a process that archaeologists need to heed.

“Some folks were disgusted with the thought of having to record an archaeological site of pull tabs; others are excited at the opportunity,” Schroeder said.

“Some find the artifact so mundane that it is not worthy of recordation, yet they’d stop to record a hole-in-top can.

“It is a phase shift — people need to begin to recognize the artifacts, have a reliable reference, and actually take the time to figure out whether or not the artifacts are a cultural resource.

“It’s going to take time until pull tabs become recognized to the extent that field personnel will know, ‘Hey, this is a site!’, just like they would if they found three pieces of cryptocrystalline silicate debitage [bits of stone used for making tools] on the surface,” Schroeder added.

“I look forward to that day.”

Schroder shared his research, and his key cards, earlier this month at the Northwest Anthropological Conference in Eugene, Oregon.

Well bugger me…wonders never cease. If pull tabs are historic artifacts then I am ancient…and if I am an antique then I have to be worth a great deal of money.
I am now for sale to any good looking younger woman at the right price. Everything comes with a lifetime gaurantee although a blue pill might be required to start things off now and again.
Pull tabs…shit a brick and just to think that if I had kept every one I pulled off a can over the years I may well have been a millionaire…well no use crying over spilt milk…or in this case discarded pull tabs.
As for the Archaeologist who came up with this the sods mad…does this mean that toilet paper is one of the wonders of the ancient world to be treated with great reverence and never to be soiled but rather to be framed and on sold in boutique antique shops

I can never work out why Hagley Park (Christchurch) is not historic, but Western Springs (Auckland) is historic?

Pull a ring - or is it pull a tab. I like the ring thing - show us ya ring.
If you don’t dig them - then you will miss the GOLD.

Hagleys been historically dug over many times!

So has Western Springs, and other 'historical" places.

As an archaeologist from the US, this was one of the most frustrating things about the job. In NZ the threshold is 1904 or earlier for heritage items, in the US it is a moving target of “at least 50 years old”. I think that the NZ method makes much more sense.

We spent a huge chunk of our time in the field back home recording “historic” can piles and garbage dumps from the 1950’s and 1960s And yes: they were sometimes full of plastic. We’ve even had to record utility lines, bridges, and paved roads from the 1960’s that are still in use. Meanwhile the historic battlefields and settlement sites get the write off to be developed.

Glad to be in NZ.

Hey let me loose over there…while the Archaeologists are digging up the local rubbish tip and everyone is distracted by and marvelling over the remains of mechano sets, tyres from 1948 Fords, Coca Cola cans long defunct and worn out bent Lps I can be digging Bull Run or Shiloh or maybe even Gettysburgh and crooning over Parrot and Armstrong shells, Minnie bullets, the remains of Colts, Remingtons, Spencers, Enfields, Adams and Sharps, pervings at Ames sword relics and the skelingtons of long dead Generals, Colonels and Privates and going gaa gaa over treasures from the 1860s!