Me mate who who used to live in the wrong Island, and came down to dredge on my claim in the Buller, finally saw the light and shifted to Queenstown a couple of years back. In the early days I knick named him “Mellow Puff”, after a season or two he kinda completed his apprenticeship under my harsh teaching method. It was a hard road to say the least. Lol. He pretty well got onto gold from day one. I knew the claim pretty well. So he was relegated to what I call mediocre ground, good for a few pennyweight a day for a holiday maker from the wrong Island. He had a habit of dredging like a torpedo. He would get onto a crack running parallel with the river flow, and more or less start tunneling. I am a great believer in working your face, Rather than being a rabbit. Many a time I would reach down , grab his wet suit collar and yank him back. Ouch the look he gave me. But after some gentle persuasion I would get him back on track. There was a time in the early days, when he thought rocks wouldn’t cause a blockage. I being his surface man was in charge of clearing his blockages, frig up down, up down off my arse It never stopped. All I would get was a look from him as he surfaced and a pained look, “I’m blocked” his eyes said. So it was up and down for me all the time. Frig this I thought. This has to stop. So I started my glaring mode, and man I can glare well if the need arises. Well it worked the blockages more or less stopped. He had already had several lessons on how to recognize blockers and the glare did the trick. Anyway after a couple of seasons, I gave him a promotion from " Mellow Puff" to “Cabin Bread” yep I had hardened him up at last. And he was as good as me, well almost lol. Well he is now up the Arrow for his first season in Queenstown. I am aware that the mighty Arrow would make an Iron Miner rich indeed. And when I saw a pic of Cabin Breads first day dredge concentrates, This was confirmed. So feeling sorry for him. I decided to make him a streaming down sluice. So I had a few bits of pvc sheeting from my old days of fabricating various gold saving devices. Plus bits of various matting hanging around. Have always hung onto my professional (velly expensive) plastic welding gun and jig saw. So I set to work. Two days later, the job was done, yep I take lots of breaks. The mats, which I call mix and match are all held down by Velcro. I love that stuff. Sluice is designed to be run by a 12 volt bilge pump, using the two tub system . Gave it a few runs, tweeked the water feed system just a tad. And boy is it a runner. I will let the pics speak for themselves.![IMG_1067|375x500](upload://to2QzrcF9nfHVDvWcWveEP4dcy6
.jpeg) 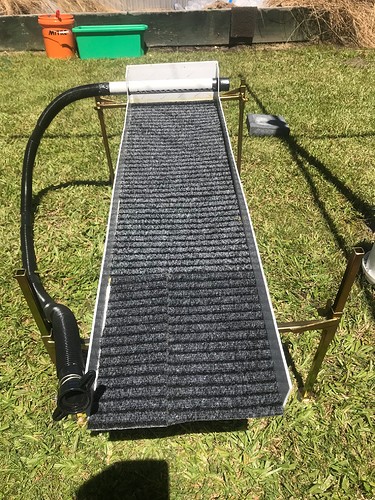 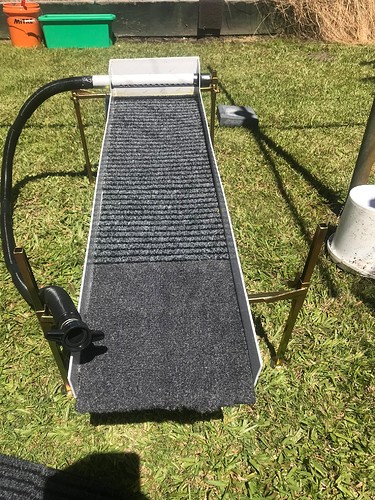 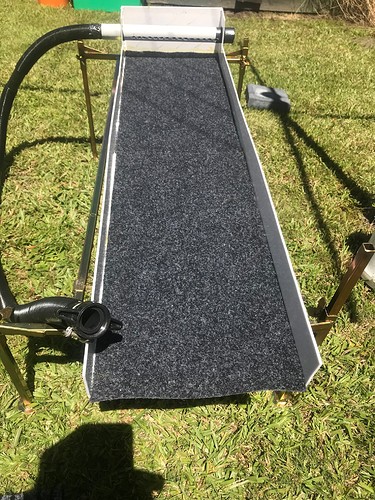 Yep a job well done, so time for a wee skite eh.

Oops forgot this one. This is for the first run, to get the flakes and coarser stuff. The other mats will take care of the finer gold and the micro gold. Right down to black sand beach sized micro gold. I will take care of that stuff for him when he comes up to scoff my whitebait and crayfish, yep it’s the only way I can get him up here lol. Into the amalgamator with some mercury, then into the retort, and finally to the melting furnace. Then the pour into one of my various molds. Either a button or small ingot. Depending how much there is. Experimenting at the moment with molding a small nugget or even a decent coarse flake. Outa the micro gold. More to come on that later. 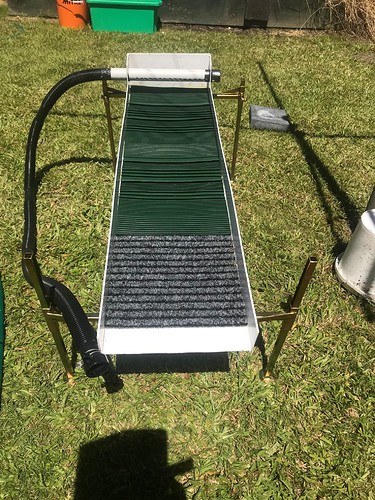 G’day Trev, Has your mate got a claim on the Arrow or shares in one? You failed to show a pic of his concentrates

That was a tease. Go to the naughty corner.

How is your dry land dredge system coming along? You better pull finger or it will be winter again before you know it.

He is working on an existing claim … His tub of concentrates, was just a pile of black to the eye. Sadly when he panned it out, bugga all gold. But it was only his first two day trip up there. So a bit of a learning curve. Guess its time to start dropping test holes to get onto the good stuff. The dryland system is ready to go, but sadly the guy who was going to come with me, is outa action at the moment. So things are on hold sadly. Bugga and lovely weather we are having too. So now the streaming sluice is done, to keep myself occupied am playing around with a suction feed to the Gold Cube. And see how it handles it. Looks pretty good so far. Also mucking around with making my own gold molds and small furnace. Even tho I have the proper stuff now. Got to keep the mind occupied, I love a challenge and learning new things. I must admit after making my first nuggets,sadly not out of gold, but sure look the real deal. My devious mind thought now if only I could find out where JW detects, I could do a secret mission and a bit of salting lol. Will even try adding a few quartz chips to give them that real authentic look. Would I do that to you, nah, you and Lammers would be onto me like a shot and I would be transported to some remote gully, never to return. Facing a whaling gun and hearing “Any last words Hatter” is not my idea of fun.

Hi trev
This matting for the fine stuff is it the type one might find at mitre 10 or the warehouse? Does it have a thin rubber base?
Cheers

Its from mitre 10 , called garage carpet. It doesn’t have a thin rubber base. But seems to have a kinda tightly glued bottom. Don’t worry nothing will go through it. I haven’t run any micro gold over it, but it sure catches black sand, so it will catch that micro fine gold. Mitre 10 do have a thin rubber backed kind of matting (grey). Its normally in the same place as the rolls of astro turf (The green Stuff) . I did add a bit of this for me mate. But I reckon because of its weave it will saturate right up with black sand. The same as astro turf, which is utterly useless for catching gold. One it loads up with heaps of black sand. Two because of the weave, Everything migrates slowly through it, and out over the end of what ever you are using.

Thanks m8 il give it a go some time. I know the stuff u mean
Cheers

Hi mate my name is wil keen to see what bilge pump u have running the systen been looking at designing similar wondered if you have tried using solar panels to run 12 volt without batter or on a small venturi nosel ??? cheers

Me mate down in Queenstown has the Bilge pump, but from memory it is rated at 1100 gallons per hour, you can get bilge pumps off Marine Deals online ranging from 350 GPH to 1100GPH. Price around $50 to $70.00. Its always better to have more water than less. I am pretty sure that a portable solar panel won’t run a 12 volt motor direct, the current has to be fed via a battery. I also highly doubt that the pressure and output (GPH) of a bilge pump would be enough to run even a very small venturi system. I made a small one up out of plastic pressure pipe, nozzle is 4 centimeter’s. It was made to suck sand and small gravel on a system I was developing. It takes a 2.5HP motor with a one inch trash pump on it, at full throttle to run it. And even then if just sucking sand only it struggles a bit. Mind you I’m asking it to lift to the top of a four stack Gold Cube. Just sand only is a pain in the bum to suck, If it is mixed with a bit of small gravel it handles it no problems. And of course if I used it to feed a streaming sluice, it wouldn’t have to lift as high, hence would be more efficient. Right reckon that answers your questions to the best of my ability and knowledge. Tip: If you are going to feed the water to a streaming sluice with a plastic spray bar. Drill the feed holes first, then using the drill bit, scallop the holes towards the water feed inlet side. That means your jets will spray straight down, instead of spraying at an angle and upsetting an even water flow. 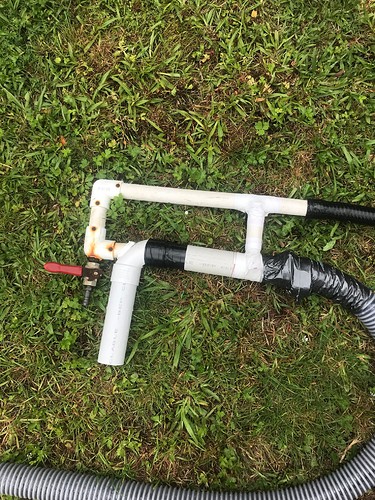