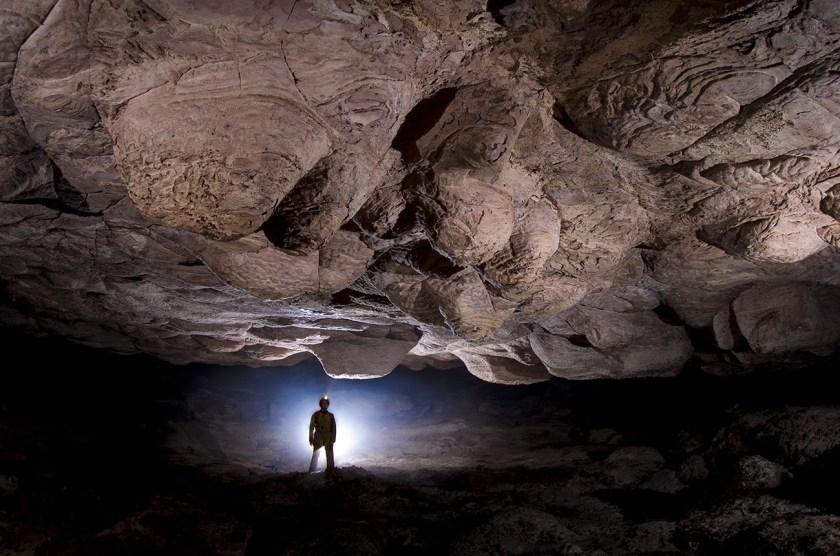 Underground, in a mining suit.
Suddenly he is alerted to a high phrequency warning.
Quickly. Automatic curved dull metal triangles popped out from the mining suit backpack. Spreading around him, similar to a spherical egg shell. His mining suit automatically hunched the knees up. Tony held his knees to his chest. Slowly the inside of the mining suit began to cool.
The metal shell was complete, he was in darkness. A dopamine & melatonin dose was automatically administered by a LiFi message between his mining suit and a chip just under the surface of his shoulder skin. Tony tried to relax, slowing his breathing, he knew what was happening.
The mining suit filled with cool water, ear and nasal plugs wormed their way to his orifices before the water reached them. A sticky tape was applied to his mouth.
The solid rock ceiling of the mine fell down upon the tiny metal capsule a few seconds later.
Gas shot up from below, casually followed by searing liquids.
The earth grated in two different places, shearing cross ways in many more, and shattering.
Rocks fell down the shaft that did not instantly collapse.
Above birds screeched, airborne ones flew in fear without a sound.
The night filled with a low rumbling, and high pitched tearing of tree trunks.
Landslides, rockfalls muffled all other sounds.
Dust rose up, plants flopped over, the ground became porridge.
Dirt came to a rest. And that was it.
8 point something on the ricter scale.

At once the machines began their work.
Digging searching for hard rock to grind and remove.
Straight down, others sucked on earth and looser pebbles flinging it skywards.
Material was conveyed by airborne vehicles to valleys below.
The digging carried on without cessation. Until after shocks caused momentary pauses.
Some airborne vehicles wetted the sides of the open cast pit.
Down they dug, three days straight.
Tony sat unconscious, in a hybernating state.
Chilled at 5 degrees centigrade, in his little protective egg, fending off the crushing solid rock.

The pit was not even, nor perfectly circular.
Some of the solid rock ridges had been worked around, others were ground off at weak points below and slowly maneuvered out by a harmony of machines.

Eventually the rock ceiling that held Tony in stasis was drilled into and broken up. The scratched shell was lifted from it’s nest.
Ferried away some distance. A high phrequency sound was communicated through the shell, the mining suit within began to drain the water, heating the inside. Oxygen levels were returned to normal. Tony’s mind began to dream vividly.
His eyes flickered beneath the lids in REM.
He was awake, now, feeling uncomfortable not wanting to wake though.
The shell collapsed slowly, releasing his mining suit.
Slowly the mining suit loosened it’s prone stance.
He lifted his lids just enough to give control panel helm retraction indication.

Agggghhhhhhhh… hhhhhhhhhh
The cool bush air was refreshing.
Stretching his body out upon the soft earthy ground. Tony groaned in pain.
His body was wracked with cramps, crinks, tensed muscles and strained ligaments.
Clenching fists, stretching limbs, hufffing he worked the oxygenated blood through his stiff body.
Eventually he pushed himself up into a sitting postion. Hunger was calling now.