Picture of a job from the past

Hi Folks,
I was playing around with Google Earth and took a look at Tairua on the Coromandel peninsular, and could not believe my eyes. way back in the early 60’s I did a contract for the then Telecom NZ to lay a cable from Tairua to Pauanui which was at that time being subdivided by Hopper Bros, Silverdale, and at that time there were quite a few new homes there. The contract required placing a telephone cable three feet below the harbour bed. I put a time of two months to do the job and won the contract because of the time basis and was informed that there would be a time penalty if we went over the time. I used a little two inch venturi that I have made which was attached to the apex of an A frame that was upside down and had my water skis as runners at the top. The cable was already lying on the floor of the harbour so I dug a hole down to allow the runners to sit on the bed and using keel rollers (the type used on boat trailers) to lock the cable to the A frame and with the venturi hooked into an old trailer Ford V8 pump got to work. Finished the job in two weeks and had the cable sitting a four feet below the sea bed just to be sure of the depth required. The chief Engineer had the Navy divers in to survey the work before they passed it for payment. The amazing thing is that you can still see where the trench started from at the Pauanui side after all these years.
If you look to the right and at the most prominent point you will see the trench line. Just a little dredging history. |Cheers. 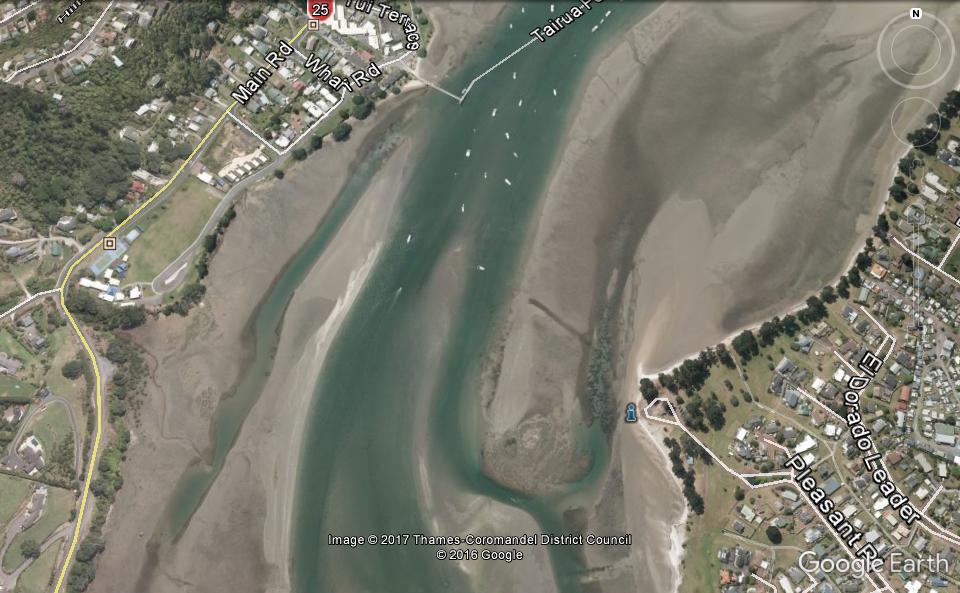 do you still have the v8 powered venturi and pump?

An interesting and enjoyable yarn…I had a feed of fish and chips a week or two ago within view of that spot…best part of Kiwiland.

Gday GoldenEel,
I have the venturi but the pump I borrowed from a firm I did diving for. Cheers

Yes it is a great part of the country. there was a tavern just down by the ramp and jetty
and I used to take in a bucket of cockles for a counter snack. With the tide run the empty shells would drift off with the current and the full live cockles would drop to the side of the dug trench and they would have their tongues out trying to dig themselves back into the sand and the it was just a matter of grabbing a bucket and scooping them up. Being out in deeper water I think, made them bigger as I had never seen such big cockles like that before and I’ve seen a few in my time.

Love cockles and down here in the deep South I go get them now and again. I daresay you would have seen another favourite of mine…flounders…you are not allowed to comment if your going to make me jellyarse!

Gday Lammerlaw,
ok no comment regards flounder…I love them too, but just outside the Tairua Heads on the Northern side, I had easy pickings with crayfish and the oldies in the village (no where near as big as it is today) were happy to receive and created great friendships over the years but sadly most have past on. One of the best locations I worked. Cheers