One man's 35-year mission to find a gold-laden shipwreck

One man's 35-year mission to find a gold-laden shipwreck

Bill Day is launching one last attempt to find New Zealand's most famous shipwreck, the General Grant, and its gold.

I have done a lot of research into this shipwreck and it is my opinion only … that as the General Grant remained visible in the cavern for nearly a year after it was abandoned , the General Grant was boarded by an unknown party and the gold removed. I am not alone in this thinking. The first expeditions to the General Grant also shared a similar view. The captain’s cabin is where valuables were stored , a search would have been straightforward. Gold jewellery found by more recent expeditions is believed to have come from the passengers drowned at the wreck site. It was also observed that the General Grant was sitting on the bottom with its deck visible bypassing shipping.
.

If that is the case then the people with the best opportunity to board the ship would have been the survivors who remained there for 18 months before being rescued. Surely they would have had a number of calm days. They had nothing else to do, outside of just surviving, but work out ways of boarding the ship & retrieving the treasure. Maybe they did just that.

Hi Kiwijw.
James Teer the motivation behind the remaining crew’s survival lived a meagre existence on the West Coast after the wreck, perhaps indicating gold was not in his possession. It’s one of the great gold mysteries for sure. I believe there is a river in Westland named after him.

Thanks goldfinger. Bloody interesting. That counts out the survivors going on board to retrieve the treasure. Interesting how he settled at the Arawhata. The area location of another lost gold treasure. The Frenchman’s Gold. Also the Lost Ruby Mine.
Also interesting how he was back in the Auckland Islands within two months of having been landed in NZ after their rescue. Helping a salvage operation which appears to have come to nothing due to bad conditions. It also appears the General Grant sank the day after entering the “cave” & was not visible there after. So no chance of just walking onboard & retrieving anything. Especially for up to 12 months.

I would think that if the General Grant had been found we would know about it. Gold found or no gold found, word would have got out. Loose lips sinks ships. No pun intended but human nature being what it is, someone would have said something eventually. I wish Bill Day the best of luck & hope if nothing else that he finds the actual wreck site of the General Grant, even if he finds no gold. Like he says, that would be an achievement in its self & he would go down in history as the one who found it.

Another missing gold laden treasure ship greater than the General Grant is the Madagascar. It just never arrived at its destination. Just vanished. There are thoughts that it may have been where the gold came from in the Frenchman’s Gold saga. Pirated, crew & passengers killed, boat burnt & sunk. Dead men tell no tails. Only the pirates themselves ended up succumbing & perishing to the rigors & the unforgiving wild NZ West Coast harshness. This was of course earlier than the General Grant & Before gold was discovered on the coast & settlements, outside of a few Maori food & greenstone camps, didn’t exist.

Very interesting thanks. Location of Teer creek and Teer plateau and Teer hill. 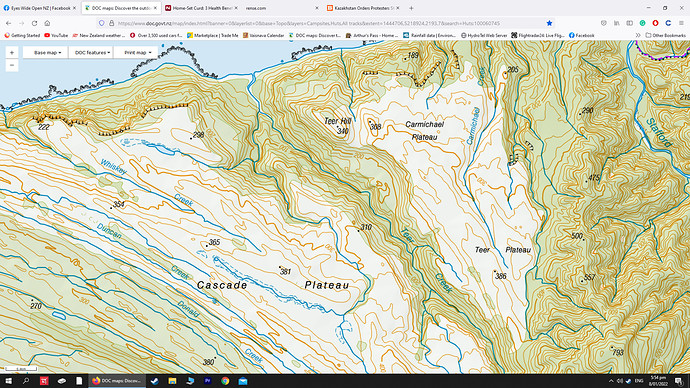 I did a lot of reading years ago inspired by Kelly taltons book on the subject from my understanding the ship ended up in a sea cave as the tide came in the mast was pushed through the bottom of the hold causing it to sink I gues the unknown question is how deep it was to the bottom and at low tide if the wreck was still accessible from what I read the survivor’s that whent back down could not identify which sea cave it whent into given it was nighttime and poor weather when they founded from what I have read there are a lot of sea caves on that coast makeing it very hard to identify later on.Another interesting point from history is that the Auckland island chain was the shortest way to get directly to cape Town and back to England for all the Australian east coast gold miners leading to the large number of wrecks in the area given the weather conditions