This is my second summer out hunting, been in and around Central Otago over last few weeks & picked up the usual items, fishing tackle, some low value coins, cartridge cases. But this is my first badge, found at a very remote highcountry camp site where an early homestead once stood. Was down a good 100mm below a stand of old man pines. I was even more excited when I did the google research. 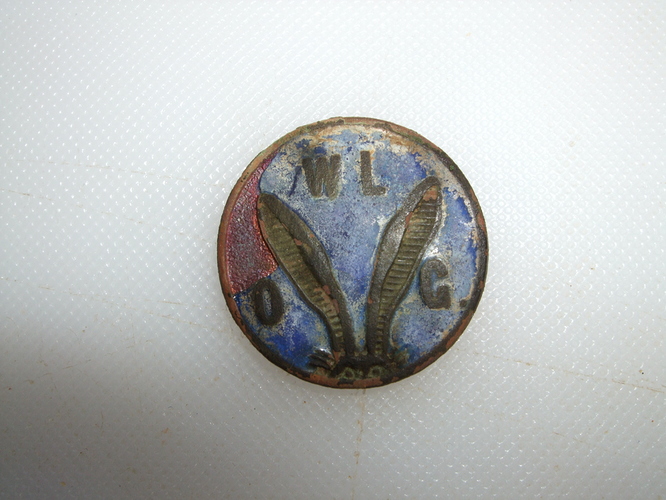 badge.JPG4000×3000 2.67 MB
(WLOG) Wilfredian League of Gugnuncs - children’s club membership badge (c.1930)
This charming enamel badge was issued for the Wilfredian League of Gugnuncs (WLOG), a children’s club run by the Daily Mirror newspapers. The club was founded in 1927 but it’s origins go back earlier to 1919, when the comic strips featuring Pip (the terrier), Squeak (the punguin) and later Wilfred (the rabbit) were first published. The comic strips followed the adventures of Pip, Squeak and Wilfred with many of their friends along the way. Written by Bertram Lamb (1889-1938) and illustrated by Austin Bowen Payne (1876-1956), Bertram also signed himself as ‘Uncle Dick’ editor of the Daily Mirror’s children’s corner. The comic strips ceased publication in 1956.
This design depicts Wilfred, a very long eared rabbit peering over the edge and the initials W.L.O.G. It dates from 1927 to the mid-1930’s. Incidentally, it is very hard to find these badges with their plating intact, as per the example illustrated above.

Nice condition and an unusual badge.

Pip, Squeak and Wilfred gave their names to the three medals issued to those who served in World War One.
Pip was the 1914 - 15 Star
Squeak was the British War Medal
Wilfred was the Victory Medal

There was also the 1914 Star which was known as the Mons Star - No New Zealand soldiers who left to fight for the New Zealand Forces got it as they went to Gallipoli and arrived too late in 1915.

Only two New Zealanders got the 1914 Star for serving on the Western Front - both were women. Puzzle that one out!

Pip, Squeak and Wilfred were named after the three characters in the WLOG Club that Nuggetned mentioned.

Just a wee bit of history for those interested.

Hey thanks for that info Lammerlaw, for me half the fun is the find and the other half the research.

I love it when you guys find things as it also gives me a chance to research although I always knew of the Pip, Squeak, Wilfred connection…oh and the two New Zealanders who were awarded the 1914 (Mons) Star were both Women I would think!
Two other New Zealanders were actually awarded it but they were attached to the British forces in the United Kingdom at the outbreak of the war (Colonel Richard Hutton Davies and Major George Spafford Richardson - both officers were later promoted to the rank of Major-General).

You are right - half the fun is in the research.

nice badge,not seen that one before