Sad to sell the claim and dredge, but it’s not working out now that I’m living in the North Island.

The remote Baton Valley, at the base of Mount Arthur, once had two hotels, a shop, Post Office and a racecourse.

It is thought the river and valley were named after a runaway sailor, Batteyn Norton who was helping settler, J.P. Salisbury, make a track in the Motueka Valley, when they found traces of gold in about 1855.1

Gold digging was in full swing by 1859, with about 100 diggers settled in the valley. There were some good discoveries, with the largest nugget found weighing 36 oz. The nugget was spotted in a wheel barrow filled with earth from a digging.2 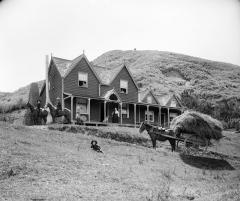 Gold from the streams fed by Mount Arthur came from many different geological formations. Baton gold sold for a lower price as the dull little nuggets often contained sand. Wangapeka gold was of reef origin and many old prospectors spent years trying to find the parent reef. 3

The Taylors arrived in the Baton in 1859 after four years on the Collingwood goldfields, and set up a store and hotel.4 Grand dances were held annually at the hotel to celebrate the birthday of Mrs Taylor, affectionately known as the Queen of the Baton, on 24 May - which was also Queen Victoria’s birthday.5 There was another hotel run by J.W. Sutcliffe further down the valley.6

The main diggings were around the junctions of the Skeet and Ellis Rivers.7 Access to the gold field was described as being so easy that a young man rode a bicycle there from Nelson.8 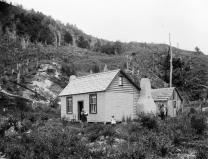 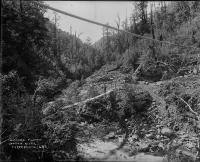 After the first enthusiasm had died down about 50 diggers remained on the field. Some took up land and became settlers and, for many years, there was a local school. Hack meetings at a racecourse at the Baton brought entrants from districts many miles away.9

In June 1863, there was an advertisement in the Colonist: “Splendid NUGGET of GOLD from the Baton weighing 18oz to be RAFFLED…” The nugget was apparently larger than a hen’s egg.10

just found this must have been a lot of gold there in it day. 36oz and 18oz bigger than a hens egg.
trapped possums in the area a couple of years back , access to the river was good

Claim and dredge are both sold