This will keep you busy. https://www.detectorprospector.com/magazine/steves-reviews/

What type of hunting i.e. waterproof - beach - gold - park etc are you looking at doing and what is your budget?

Some info on some of the most popular brands here -

Can’t go wrong with this, best value PI in the world - https://www.aotearoaprospectingsupplies.com/product-page/sluicy-mcsluiceface

Want to find me a good one to

Gold Kruzer is a good one got one for Sale 900 $ …fix Prince with original Box and the two coils … ;)…PM If interested…

Want to find me a good one to

Experience over the years has shown me that Minelab are top of the range. Have you gone over Steve’s reviews that I put that link up to? I am not affiliated to any company & only speak from what works for me out in the field. My main detector is the Minelab GPZ 7000. Best gold detector hands down. A brand new one will cost you over 10k so that will sort out just how serious you are. There are the pulse induction Minelab detectors which still pack a bit of a punch & the 4500 is less than half the cost of the GPZ. Below those are the VLF detectors. The Gold Monster 1000 & the Equinox 800 are a good choice if you are new to gold detecting as they won’t break the bank & if you decide that gold detecting isn’t for you then you won’t lose too much in on selling it. They don’t often come up 2nd hand. Like most things there is a learning curve to gold detecting. Both in operating the detector & learning its language, some more so than others, & also learning to read the ground & just where the most likely spots are that gold might be. The “easy” gold has gone & it takes a diligent & patient operator to make finds these days. If you have a love for the outdoors then any gold finds are a bonus & just the excuse for getting out there.

Goods word’s from jw spent close to 2k on a good VLF system drove me insane found so much crap and no gold the gold monster is probably the go to start machine in the VLF category dredge NZ can hook you up however they are hopeless in highly minerlazide ground moved to a minelad SDC started finding gold but they are not without there faults eg batteries, headphone cable falling apart etc at the end of the day its down to your efforts in finding spots and what you want to invest money spent = gold go cheap go mad !!

Gav…you might want to check your spelling at the start of your post. Can’t as opposed to Can. Big difference

Only problem with minelab is they weigh to much without harnesses

I never had much luck with the monster or SDC. I actually thought the SDC was shit for the price and was glad to be rid of it, hardly minelabs greatest achievement having the fixed coil at the time. It seems like some of the quality they used to be known for is disappearing as well. 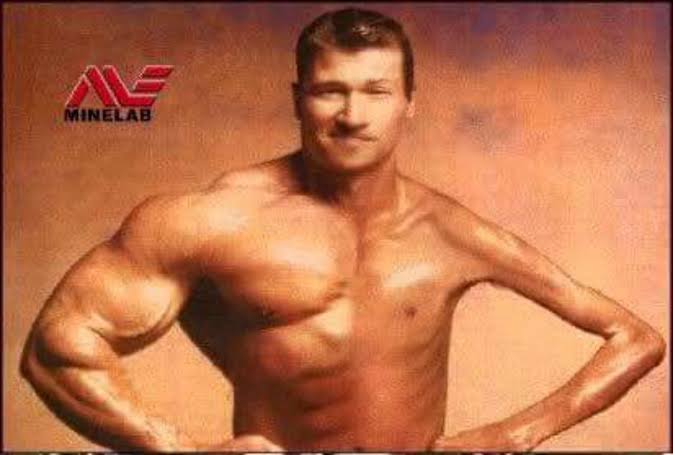 I’ve got a Minelab SDC 2300 and recently an Equinox 800 and I love them both. Minelabs are definitely a safe bet and well proven.

Minelab is definitely a great brand. However I’ve found lots of gold with my Fisher gold bug that I bought 10 years ago for $800. It’s taken an absolute beating over the years but refuses to die. I also have a second gold bug and a third broken gold bug haha. If they die I will buy an equinox 800.

I think I have made it fairly well know that I wasnt a fan of the SDC 2300 either. My 4500 with sadie coil blew it away time after time to the point I just gave up on the 2300. I got sucked in to its fold up & water proof ability as I do a lot of hiking & E-biking into remote areas & it being a PI too ticked a few boxes for me. It is a real pain E-biking & hiking long distances with either the 4500 or GPZ & the harness & other paraphernalia needed that I have to carry in my backpack. As our ground is so insanely mild & I can run my detectors flat out the sdc was of no advantage to me in NZ. In highly mineralised ground is where the SDC excels. That is obvious by how much the Aussies love it & what it was made for & factory tuned for with its one only fixed coil & minimum setting adjustments. The 4500 with the multitude of coils one can plug into it out does the 2300 here in NZ. I guess in the wet west coast bush & up creeks with it waterproof ability can be an advantage. Here in Central Otago’s dry, open country not so much.
The harnesses on the Minelabs have never been an issue for me. I have used them since day dot & they are just part of the setup. I feel naked without it. The harness with bungy also serves a very important role with transferring the weight down onto the hips & not fucking your shoulder or elbow as I know it has done for a lot of older operators who thought they were bullet proof & have now paid the price. On the PI’s the harness also carries the battery. I have my boosted twin external speakers on each shoulder of the harness so they are under each ear & the harness also carries my signal amplifier & wireless audio receiver.
I do still love my older GB2 & still use it to this day. I just love its little bullet proof, rock solid little sniper coil. I mostly use it as a pin pointer & discriminator on deep Zed digs or even on my 4500 digs back in those days. I will often wave it over schist bedrock to snag the tiny tiny bits. The GM 1000 & Nox 800 with 6" coil is also very good on tiny bedrock trapped gold. I just really gel with the GB2 though. So easy to use & it has a few tricks up its sleeve. So I am not all Minelab. It has been a long time since I used a ML coil on either my Zed or even my 4500 & even back in my GP 3000 days. Nugget finder, & Coiltek on the PI’s & the Russian X coils on the Zed just blitz the ML coils. X coils also make coils for the PI’s.
I went back to a spot on Saturday that I had not been to for over two years which was when I used the GPZ & the ML 14" coil. I did get a few pieces but it got to a point when I could squeak out no more. I had not been in there since but I had not had the 15 x 10 X coil in there. Bit like the weekend before when I went into a similar spot that had dried up for me with the Zed & ML 14" coil when I got 9 bits with the Russian coil. Saturday I got 8 pieces for 1.46 grams. The bigger bit was a solid little ball of .77 of a gram but was down bloody deep I thought for its size.

The two smallest pieces, .02 of a gram each were found with the GB2 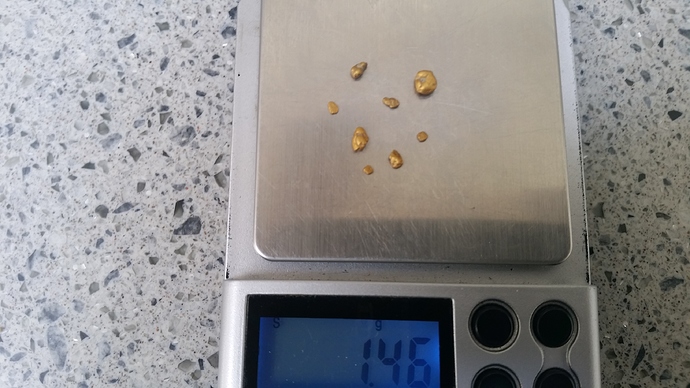 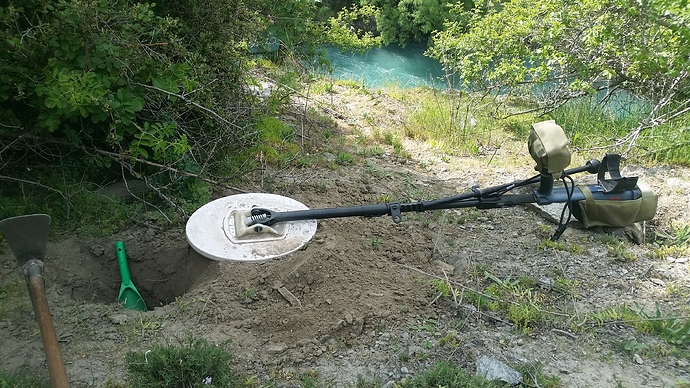 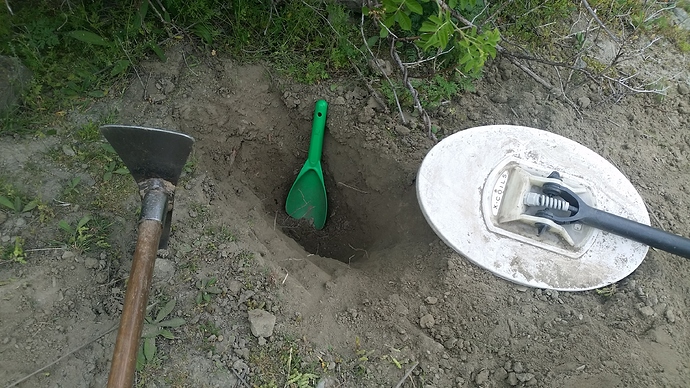 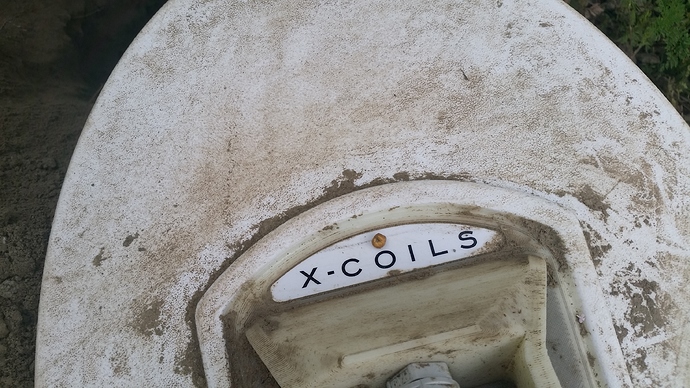 I guess it just depends what ground you’re going over as my experience on the west coast has been a bit different to JW’s Otago experiences, so I’ve come to the conclusion the ground’s a bit more difficult in a lot of the creeks on the coast…

My original favourite is my Fisher Gold Bug Pro which sounds quite similar to JW’s GB2 but then I was blown away by the SDC over the hotter bedrock the GB couldn’t work with - just cut through all the mineralisation without any issue at all, so meant I could go back to mop up all the bedrock sections the GB couldn’t handle. I think I’ve only found a few spots where the mineralisation has given the SDC trouble and it’s only been the odd very rare false target.

I’d also ran my old GPX 4500 in these hotter areas and the SDC excelled over it. But I wouldn’t put too much weight in that as I found the GPX far too complicated with all its options and settings, so it could well have been user error at play.

Then similarly, on another thread JW mentioned he can fun the Nox 800 on the more sensitive Gold 1 setting where as it was unusable on the ground I was playing on but the Gold 2 setting for “difficult ground” worked a charm.

My success with the gold bug is entirely due to the extremely mild ground we have here in Marlborough (and the areas I used to frequent in otago). On some visits to the west coast and golden bay I struggled with hotter rock in certain areas and wished for a PI.

Hi, Newhunter17 as most have said, to get a good detector, and you need to have a bigger budget, As I have for sale a garret ATX comes with three coils waterproof and comes with waterproof headphone,
and its a pi and has a hard case It’s going for $3500.00 and it packs up to fit into a backpack