If you could turn back time...?

I still, to this day, bear a disturbingly strong grudge against my parents (as a then 11 year-old) saying that my late 19th C. sea-chest of lead soldiers (saw a lesser collection sell for over GBP1,000 last year) was too heavy to ship out to NZ - and that my WW2 RAF flying helmet found in a field in south England was included in that decree.
What galls me even more, to the point of annoyance, is that 50 years later my feeble brain can’t even recall the name written inside said flying helmet (in blue ink on the inside of the earcup that I vowed never to forget, as we packed everything else) only that it still had the cracked Mk8 goggles and O2 mask attached… I would give almost anything to meet the N.O.K. today and say a personal and very heart-felt “Thank you!”.

As kids, I remember our ‘gang’ trying to drag a Heinkel prop spinner out of the woods (Maybe 1.5m x 1m in size) to our hut - The war was still real to us being only 20 years ago. We even had a complete Hurricane MkIV fuselage and wings stacked under a tarp against a field hedge nearby, which we used to play in! A German prop spinner was an extremely valuable and highly-prized trophy (every kid had BoB cartridge cases!..Yawn) - Our spinner endeavour was foiled only by the humble Allied blackberry and pre-pubescent kids lack of “Ya big Jessie!” . Looking back via Google Earth, that site is now under a well-established housing estate, and I often wonder who ended up with the spinner…or did it just get melted down as scrap?

What finds have others had, that were treated as commonplace back in ‘the day’ but you would love to have a second chance at holding/ changing the course of events?

Our family including uncles, aunts & many cousin’s used to holiday at the boat harbour campground in Kaikoura. I found a greenstone axe head (that’s what it looked like to me) just lying on the sand in plain sight.

Not 100% sure what happened to it but my father wanted to donate/lend it to the summer museum (where he lived) which was then destroyed in the earthquake…maybe one day I’ll find out?

I knew a girl when I was a teenager, a friend of my sisters. I jumped her bones only a handful of times, but in retrospect could have given her a few more…

should have kept my first car 1947 v8 sedan. brought it for $350 sold it for $350 . worth abit more than that now. and the back seat saw sum bones been rattled. this time my mates sister

The half dozen horse drawn drays I was given but was a bit tardy to remove so the farmer decided that I didnt want them and burnt them - the 1854 Beaumont Adams revolver in a case that my great great grandfather carried on the gold fields - the Bren Gun carrier I was also given and once again tardiness in removing in time cost me it - the two a***holes who got left the farm KNEW it belonged to me but would not let me retrieve it - the B******s - two lonely old men they were living at home r***ing mummy while they waited for the right boy to come along! - Get the impression that I dontlike them? Several antiques that I could have bought for a song but didnt - not keeping my Ford Customline V8 - yes sir the list goes on!

I looked after a old fellow in my teens. Just the lawns and small jobs round his place he couldnt do anymore. One day he pulled out his bag of ww2 medals and a worn paratrooper dropblade knife and said for me to take them as he knew i would appreciate them.
The guy had been in the Afrika Corps and fought at Alamein.
I said no it should go his is Grandkids etc.
He died a week or so later.
As i was still doing the lawns, i checked in with his family that the medals had been found safely from their hiding place…his dickhead Son in law told me he had taken that bag of Army shit to the dump and chucked it! and to never mention the Guys war service to his Grandkids.
FFS the guy had served in the German Expeditionary Force in Africa!!!
The ignorance was appalling. The RSA welfare officer who had arranged for me to do the lawnmowing said that kind of thing was quite comman and that the guys service record was completely clean just a young man who had volunteered for and adventure and ended up in the scrap of and for his life.
Really wish i had at least accepted the knife.

wish i had gone in with my ex boss when he offered the chance for me to be a partner in his business. sold it years later for several million.

I had some hologrpahic Pokemon cards. Heard there were counterfeits going around, some kids dad owned the factory and he could get any amount of cards for free.
Spent several hundred collecting them.
Sold off in a hurry for $20.
Today 1 of those cards is worth $1000 USD, though I’ve seen it go for a couple of hundred.

I have many hundreds of Star Wars cards and well over 600 Commando comics ranging from about number 129 onwards - but today who wants them - none of that sort of thing is worth much.

I was not a gambler as a kid BUT I did buy things when I was at high school - two pure gold 1872 California State 1/4 dollar pieces from the guy who became director of Sotherbys in Britain, a Tranter spur trigger revolver for $1, a German War Merit Cross for half a crown, an 1819 George III Crown for eight pence - to name a few…I was a budding entrepreneur. I even offered an old guy a cake of Cadburys chocolate for a .50 Calibre percussion Dean and Adams Dragoon revolver and he smiled and just gave it to me, and then there was the 1849 Colt .31 Percussion revolver - I had to dig deep for it - it cost an unearthly $8!

Dragoon revolver I’d buy that for a dollar. Was checking out old transformers toys the other day if my younger brother had kept his optimus prime in box it would be 10/12 thousand U.S now. But tell that to a kidstrong text lol.

I still have it - all these years later. As for Optimus Prime - I must look in amongst the toys my son had as he had a lot of stuff like that and they are all still here.

Found this .303 round yesterday what’s your take on it. It’s crimped at the neck like we chatted about before but marks on side of case confuse me. 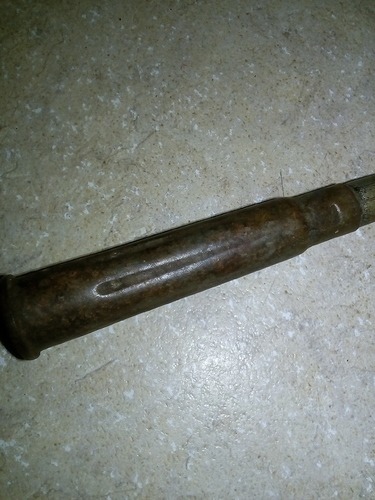 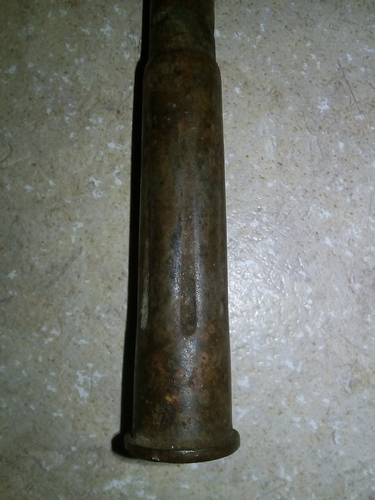 Think it may be a “drill round”

My claim to fame as a 6 yr old I went into my mums jewelry box and took her pirate treasure and dug a hole in the bush next to our house now I should have made a map but sadly didn’t …the family spent a lot of time looking but never found it.The loot consisted Victorian broachs ,rings, necklaces I knew this from my mother repeating it when the dog collar was striking my backside…anyway the area concerned is now a concrete driveway

Address please?
My night job is tunneller.
I’ll split the loot with you 50/50