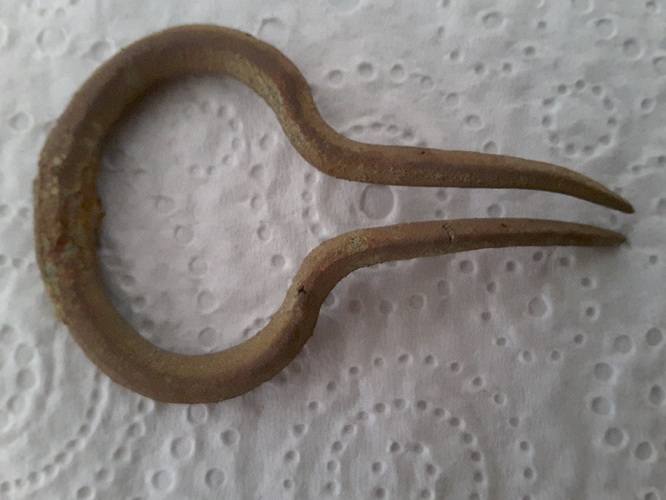 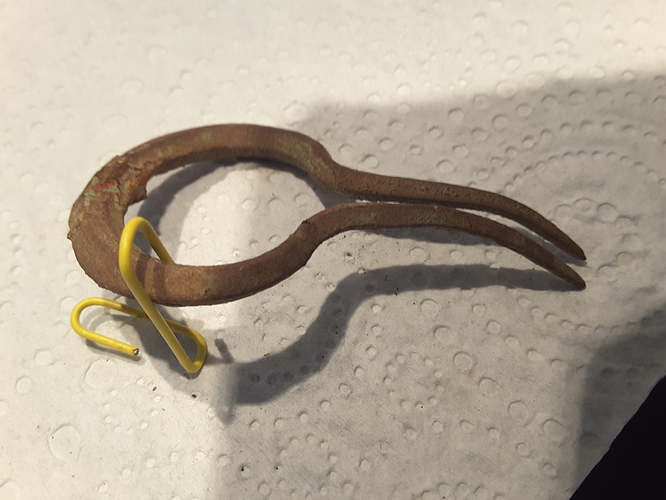 Yep, MK is onto it. One item I can’t seem to shake from my bucket list.

why the pointy prongs though. and the ones ive seen images of have a notch in the top that the ‘reed’ sit in. unless its on the other side and not shown. totally uninformed here but I was thinking something that could be banged in to a fence to tie up a horse. lol

The jaw harp has been around for centuries so plenty of potential for regional variants. The modern ones likely have the squared ends to the arms for Health and Safety, but I imagine the finer ends could have given a greater range or higher tone.
You can see where the ‘reed’ was attached in the inside of your frame, with the reed possibly introduced when the frame was being hand forged, the modern ones are crimped because it’s an easier production line method.
There is a record of an old jaw harp frame being found used as a gate catch in Hawkshill, Surrey, England [Elliston-Erwood 1943] Yours might have been used in a similar way, given it was found in a paddock.

Thanks Mudwiggle. Interestingly the inside bevel you see is also repeated on the underside. Not yet quite sure what metal it is. With your clue I will trawl the internet. I origionally thought it may have had something to do with a rifle…enfield? Discounted it as a hair comb too.

Metalkiwi…you get the moro bar.

Further investigation reveals you are spot on!!!