This is my first post but I have been browsing for awhile and have learned heaps. Thanks for all the good advice!

I’m going on a trip soon and want to make a hand dredge, the type that goes into a bucket. I’ve seen heaps of designs n vids but I was wondering if anyone here can recommend a good one with NZ parts. It’ll be much appreciated.

hi ive seen a vid on you tube, but I honestly think a shovel and sluicebox will get way more gold

Yep…Get yourself a warm wettie and snipe that gold up brother!!

Yeah I’m making a lightweight sluice out of drain pipe. See how it goes.

Waste of time. Just a gadget that isn’t really practical. I am with with webby1 & Mal. You would be better off just making a little crevice sucker. 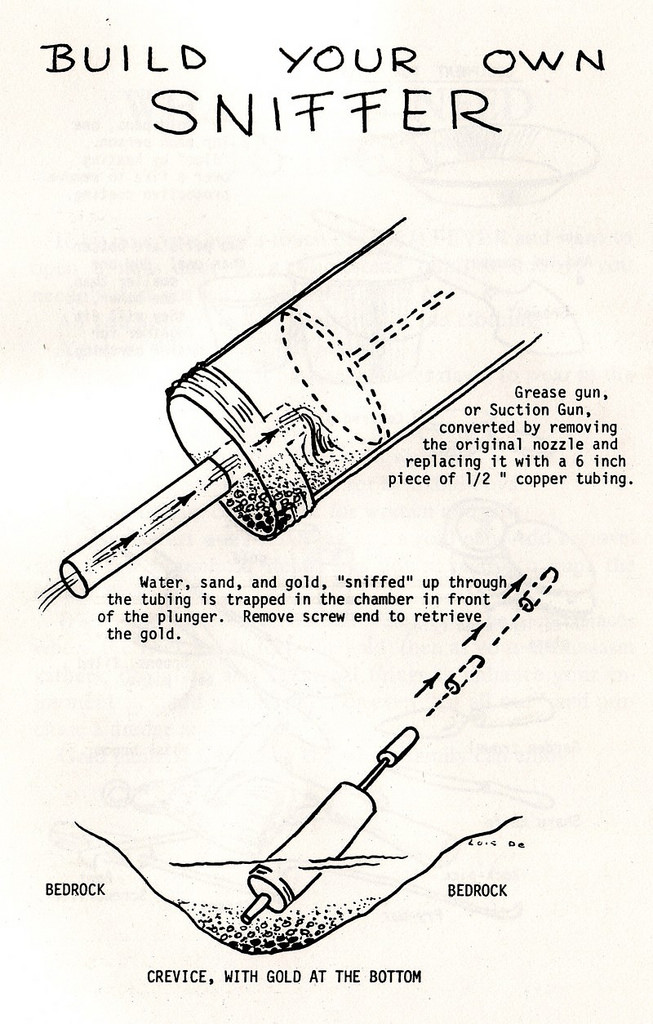 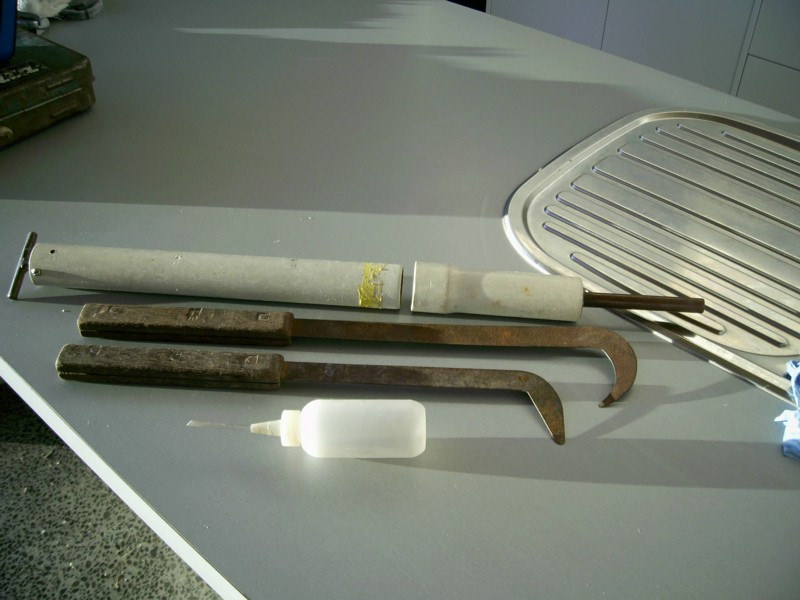 Here is using it without the nosey parker attachment on the end. Just sucking up gravels from a crevice well above the normal creek level. I had to bucket water into the crevice & then just sucked & dumped the contents direct into a gold pan. 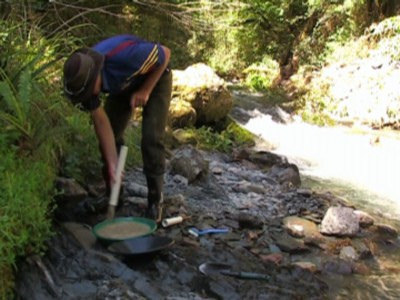 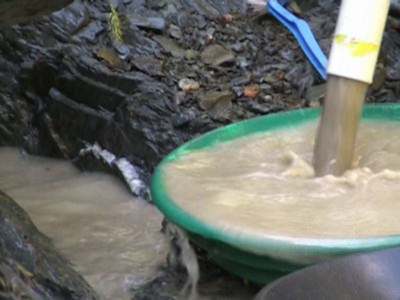 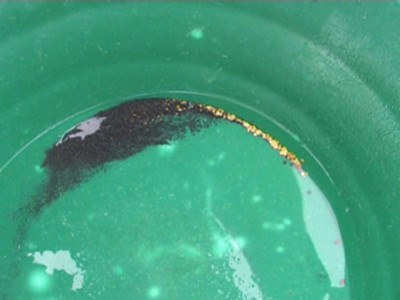 Another good thing to make is an underwater viewfinder out of 100mm PVC pipe with a bit of glass siliconed into the end. Keep the glass up about 15-20 mm so when you place it on rocks or the ground the glass is protected. 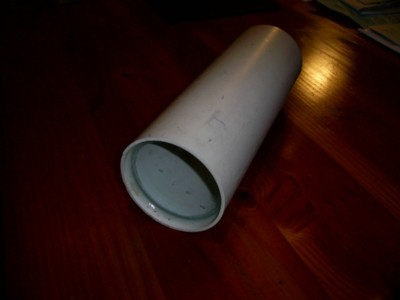 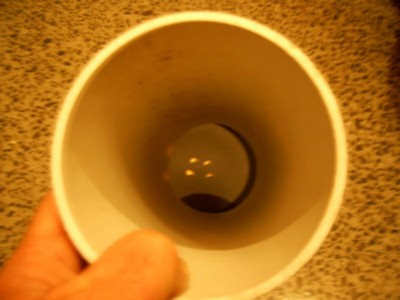 Get yourself wet & get stuck right into it. No pussy footing around with that type of set up. More hassle than it is worth. No gold is easy gold. But it can be fun trying.

Yeah …John’s onto it…what he said!..Hey Rockman I can give you a stream sluice if you want…I purchased a heap of gear from Au-grumpy and he threw in some extra stream sluices,matts etc…happy to courier to you to get ya started…Mal

I hate to say this John but I have absolutely no idea where the word Sniffer came from. I can only hazard a guess that someone either misread the original name or decided to change it.

My family have used these devices for sixty years or so and this means that they have been around for a very long time.

There was a resurgence of interest in Gold fossicking toward the end of the late fifties and the early sixties. It is probably that this resurgence was in the wake of the first mention of underwater dredging in California. I believe that a fellow called Ron Holdaway got the idea to make himself one of these dredges and went ahead and did so. He discussed it with a fellow called Jack Tall who in turn told his neighbour Charles Thomas (my Uncle) and they decided to go into partnership with a third person Jack White and build one as well.

Jack White was older and pretty much the brains behind where gold lay close to Dunedin. His father had been manager of the Sandhills Gold Dredge at Skippers and his mother was an Aspinal of Aspinals Gold claim in the Skippers - they used to get 2 ounces an hour average!

These people were the pioneers of gold dredging and underwater diving in New Zealand. A friend of mine plus Dad were quick to follow. All their gear was home made and so were the little hand suckers for under water. Ther correct name is SNIFTER - not sniffers.

This photograph is of one of the very first ever made and therefore it has to be a collectible relic of the first days of underwater gold fossicking at the beginning of the 1960s.

We used to haunt the second hand shops and Jack White was just retiring from owning a garage…every antique brass car pump that turned up was made into a Snifter. This one was put aside and got lost under all the bits and pieces and only turned up recently amongst my uncles belongings…he collapsed when gold mining in 1978.

The body is a vintage car pump - the handles were made from screw driver handles and the nozzle was brass pipe. 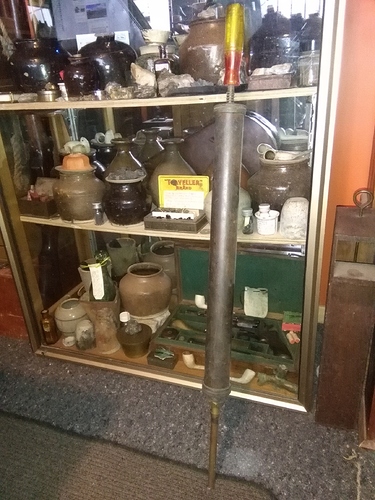 Thanks heaps JW that looks great n that viewfinder an excellent idea! Got the kids coming this weekend, be a cool lil project for us.

If you choose to make a viewer like John suggests then a few things to consider.

A larger glass bottom box, say ten inches by seven inches and seven inches high gives a clear wider all round view with plenty of light but does take up room and is heavier…I always used one of them.

A round PVC viewer like John suggests has its down sides - ya gotta be cross eyed to see down them! They Do have advantages though - if you make them a foot or more long - you can look into narrower crevices and overhangs. They are excellent for that. They are also lighter and of course you can make them any width you like so that the wider ones dontmake you cross eyed!
If you choose to make one of them one wee hint is to drill a hole through the PVC tubing immediately below the glass so that air does not get trapped to create a nauseating blasted air bubble that hinders viewing. I always took a light round one like Johns to look in difficult places where my larger square/rectangular box was impractical.

They are marvelarse things to carry with you.

Thanks for the tips Lammerlaw.

I just use a clear round plastic cookie container as a viewer - you have to check the bottom is properly see thru first. (lots aren’t) Then I put some duck tape on the edges so I can comfortably hold it in my teeth freeing up both hands to scratch out or snipe up the gold that I can see through it. Cheap and cheerful but very practical and no making required.

underwater diving and dredging in New Zealand predates that era, a Mr William vear was the first dredger and diver around New Zealand as far as I’ve researched, he set up the first dive site in the Wakatipu in 1927 at five mile creek, the papers past report it as a break through and the first of its kind, divers who had worked the coffers dams were seeking other opportunities after work dryer up

Yes that will be correct and indeed I have a newspaper article about diving in the 1920s somewhere here…somewhere. I think there might be a photo as well somewhere. If we want to be pedantic then yes someone dived for gold around the time of the depression and suction dredges were experimented with during the dredging boom except they were rather large!

In New Zealand even a submarine was made to mine gold in the Clutha but it never got there.

Underwater dredging as we know it now began as I stated in the early 1960s - that is skuba diving with a small engine and pump, under water dredge and floating dredges a little later. At the same time we all used the snifter to pick up gold when practical. It was a whole new era in goldmining as skuba gear and accessories were readily available and interestingly enough it began before the huge price increases in gold. I cannot be sure but I think my Uncle and partners first sold gold at either $15 or $35 an ounce. I know that they thought it was wonderful when gold ‘skyrocketted’ to $150 an ounce as they sold a really large amount and thought they were made. Even in 1987 the price paid by Englehardt Industries, which was the best offering, 95 percent, was only around the $250 per troy ounce mark. Back then I only knew of four lots of people diving and dredging for gold, the chap Holdaway I believe, a friend of mine who trolls these posts! (I know ya looking), my uncles and partners and Dad and myself.

Hi Graeme, We have had this discussion before on the wording of sniffer, snuffer, sucker etc.

They all mean the same thing & I guess it just depends on what word you want to settle on. Sniffer isn’t my word for it but I guess like a dog sniffing around the ground so to is this gadget sniffing around bedrock cracks & crevices. Or snuffing up material like people who snuffed snuff up their noses in the old days. Today’s modern equivalent would be druggy drongos “snuffing”, sniffing Cocaine up their noses. Same thing. I have always myself just called them a crevice sucker…as that is what it does. Sucks up material. It also has the advantage to blow out water. So when sucked up under water & full of water you can then push down & blow water under pressure into the cracks & crevices which has the effect to flush out all material & stir it up. By then quickly sucking up again you get this material before it settles back down again. Especially gold particles. So by doing this suck, pump, suck pump, suck, you get all the material from down in a crevice that will get sucked up & sit in the retention chamber when you pump down again. So you will lose no gold. you just have to judge when the retention chamber is full or close to full & empty it into your gold pan for final processing.
I see a couple of my pics didnt load up. This only seems to happen on the Paydirt site.

As for the glass bottom box or PVC piping viewfinder - I like your term viewfinder more and always hated old Jack White’s term as he called his one a ‘scanner’ for scanning the gold in the crevices. I always referred to the actual glass bottom box as a ‘Glass bottom box’ and the PVC one as a ‘viewfinder thing’ though generally there were three words I used to name it - the first word was not necessarily the same depending on my mood but it was generally a fairly scathing expletive, more often than not beginning with ‘F’ as I could not find it, it was at the bottom of my pack, it had got washed over a waterfall or washed down the creek into a deep hole etc.

The best snifter I ever had I found in the river when I was out for a walk one day. It had been left behind by poachers - the sad part was that it wasnt full of gold. It was a commercially made one I think made of stainless steel and PVC.