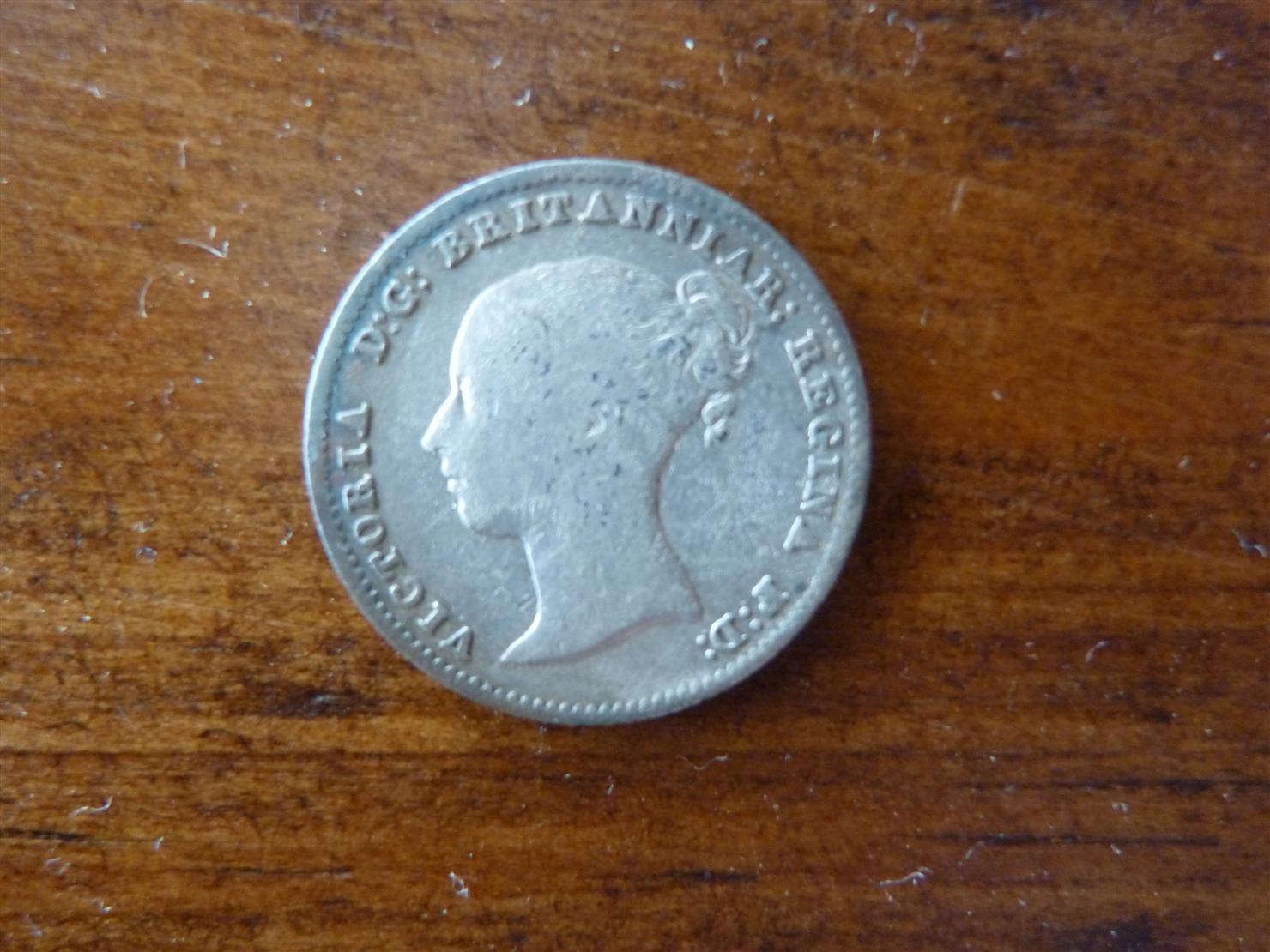 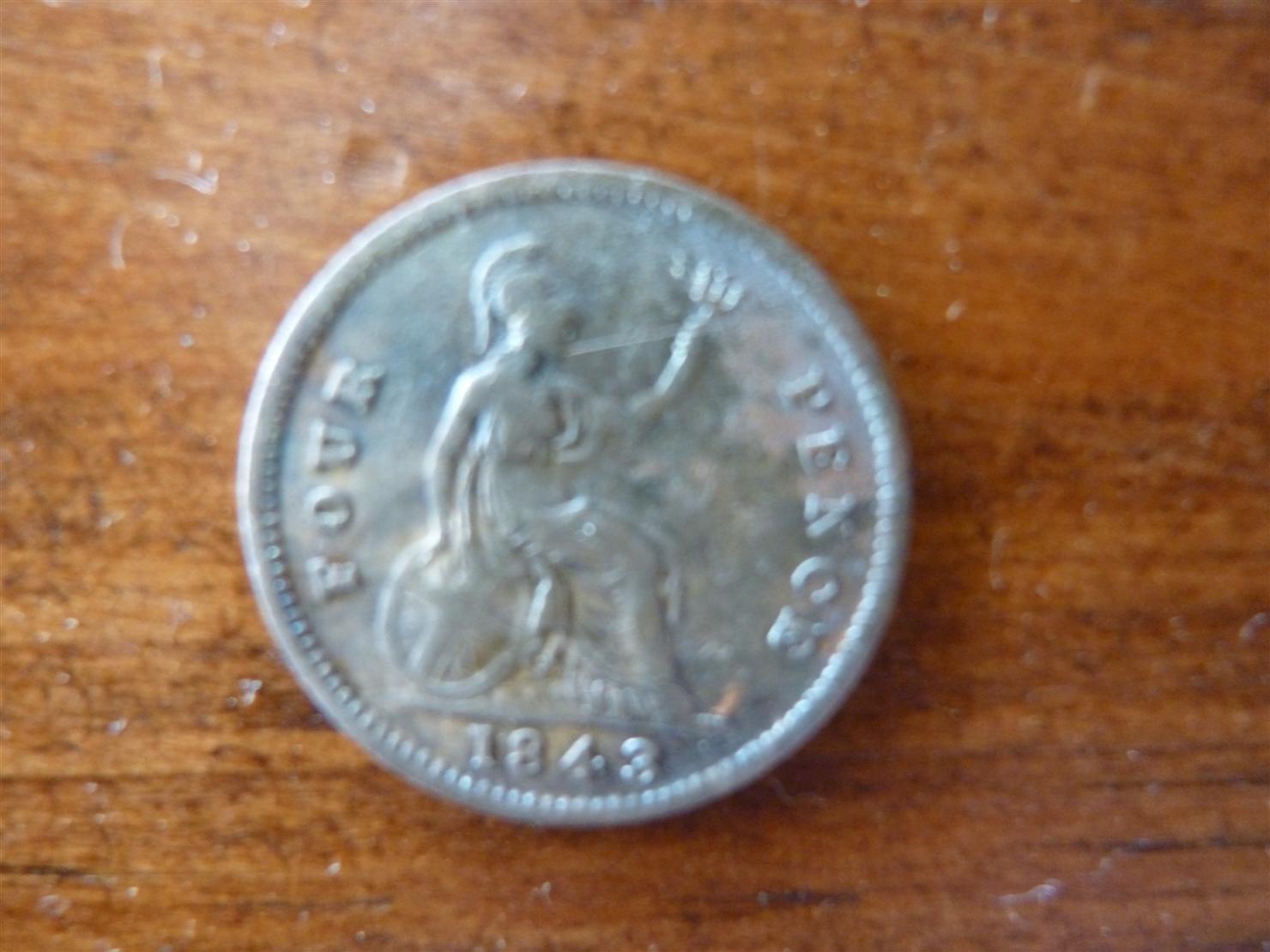 I found this some time ago on a friend’s farm that once had a ‘pub’ on it in the 1800’s.
Seeing as I’m not going to Detectival 2019 to dig up Roman treasure from Oxfordshire, this might inspire some to OUR treasures and history…

A groat is a 4 pence coin. There were two forms of groat, the currency issue like this piece with Britannia on the reverse, and a special piece for the Maundy Thursday ceremonies witht the numeral 4 on the reverse. Although the last circulation groats were struck in 1856 (the threepence coin had become more popular), they remained part of the general currency until 1887.

History (from Wikipedia)
The prospect of the introduction of a general circulation fourpence coin was raised in 1835, when the MP Joseph Hume spoke in Parliament in favour of its introduction. His reasoning was that the coin was convenient for paying cab fares.[2][3][4] The coin was first introduced in 1836, but proved unpopular with cab drivers as they now simply received a fourpence as payment, whereas previously they would often receive a sixpence without the demand for change.[5]

The threepence was introduced in 1845 to “afford additional convenience for the purpose of change”.[6] This new coin proved much more popular than the fourpence, and by the early 1850s it was decided there was no need for both coins. The final regular issue of groats was made in 1855, although proofs were minted in 1857 and 1862. In 1888 a special request was made for a colonial variety to be minted for use in British Guiana and the British West Indies. The groat remained in circulation in British Guiana right up until that territory adopted the decimal system in 1955.[7]

Design
The original reverse of the 1836 version of the coin, designed by William Wyon, is a seated Britannia, holding a trident, with the words FOUR PENCE to each side. Two different obverses were used during the mintage of this coin. Wyon’s likeness of William IV appeared in 1836 and 1837, surrounded by the inscription GULIELMUS IIII D G BRITANNIAR REX F D.[8] Groats bearing the likeness of Victoria were issued from late 1837 onwards, also designed by Wyon, with the inscription VICTORIA D G BRITANNIAR REGINA F D. Those fourpences minted in 1888 bear the “jubilee head” of Victoria, designed by Joseph Boehm – the reverse is unchanged.[9]

There also exists a pattern coin, dated 1836, which bears the same obverse as the William IV issue coins, but has a different reverse, designed by William Wyon, which has the inscription 4p instead of the words FOUR

These three groats show the two types - also represent three regents. I did find a groat many years ago but I didnt put it on here as it is a bit worn. As a kid British coins fascinated me so I collected a few. 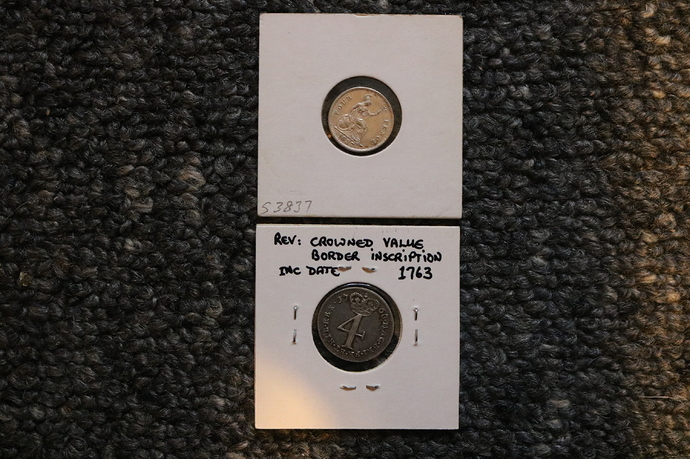 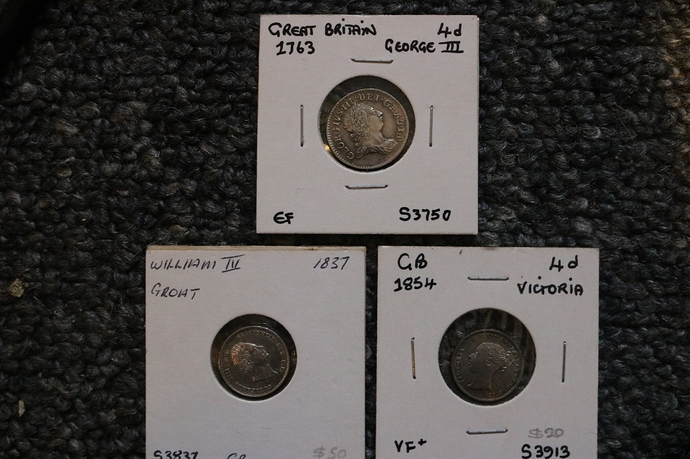 Thanks. You find some great stuff too!

Thanks for showing the different Groats…great specimans!.I would imagine a bit of (drunken)confusion with 3d in your pocket too…1d up in the till for bartender???..well until the Groat was phased out.

The Challenge - would be to find one of every British denomination. It might be said that it is impossible to do that in New Zealand BUT nothing is impossible except striking a match on jelly.

British denominations which COULD be found are;; -
1/4 farthing, (unlikely) 1/3 farthing, (unlikely) 1/2 farthing, (one I know of found at Waikouaiti at the site of the hotel photograph included) farthing, half penny, copperpenny, silver penny, (unlikely) silver penny halfpenny, (unlikely) silver two pence (unlikely) three pence (common) groat or four pence (unlikely and yet several found) sixpence (a dime a dozen) shilling, (common) florin (not uncommon) half crown (not uncommon) double florin (possible - I got one years ago) crown (possible) the of course the golds - half sovereign and sovereigns found now and again and also possible though I have not heard of any found are guinea, half guinea (both unlikely as well as two pound and five pound (quite possible)

And if you think that the Brits had a lot of different denominations then think again - thats only the start and I have listed only the ones that fit into the unlikely to often found categories. During the years of coinage in Britain there were about 70 different coin denominations though that includes Roman, Celtic etc. 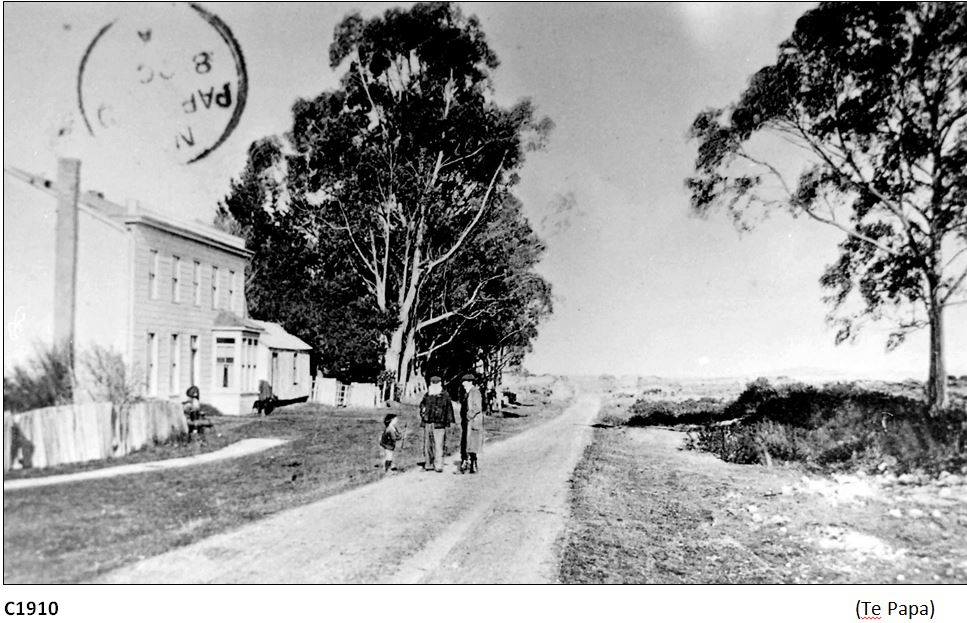 Is that you in the middle Lammerlaw? Nice jacket.

I think hes to young for lammerlaw

Yep thats me - that was my 43rd reincarnation.

I forgot to mention that I used to buy my grandparents groceries at that hotel when it had become a shop - It was known as ‘The White House’ That was sixty years ago - I was partially raised by my grand parents not more than 650 metres from the old hotel (I measured it on Google Earth - me smart fella I am)…it was one of I think 11 on Beach Street back in its heyday when Beach Street was a disembarking point to the gold fields in the early 1860s.

Directly across the road in the empty paddock there was a tin shed. I cant recall it having a window but an old guy just like the old fellow in the photo lived in it. He used to wash and get his water in a horse trough beside the shed in the open.

some great coins there lammerlaw.

Thanks buddy - I collect a bit of everything and coins have always fascinated me - British from year dot to 1921, American up until 1921 and ancient world. New Zealand coins are either - Silver - spendies and boring!