Didn't expect this in the sluice box...! 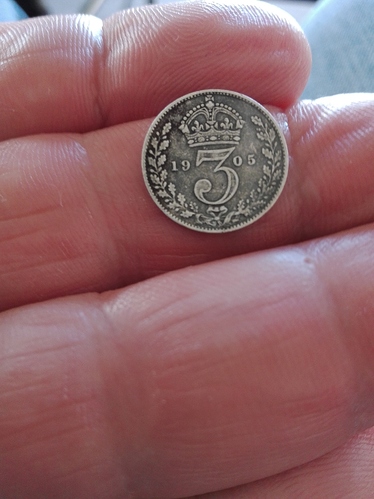 I love it! Now you dont need to cash in on the gold flake - its already cashed in! A great find - I would be over the moon!

Wow, that is fantastic!

Very nice. A few years back someone on the coast sluiced up a half sovereign! 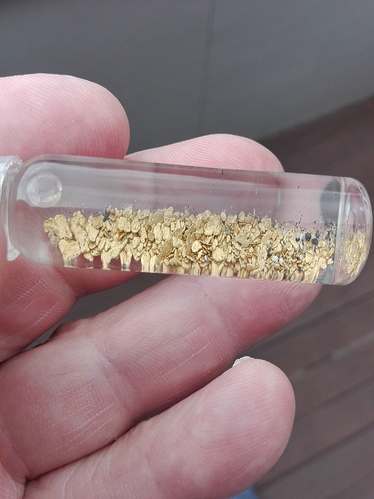 That is just bloody marvellous - a good haul and now you goal is not to give up until the bottle is full - you can do it - you WILL do it.
Make sure though that you have a thick glass bottle and DO NOT take it with you each time you go - I did that with my mercury bottle - for a few years I poured the mercury into a pan to get the fine gold and …well…one day I lost it in the grass at the main road crossing at Deep Stream, Otago. I have no idea how much gold wa sinit but possibly an ounce.

Sounds like a treasure hunt there Lammerlaw. The Rush will be on. 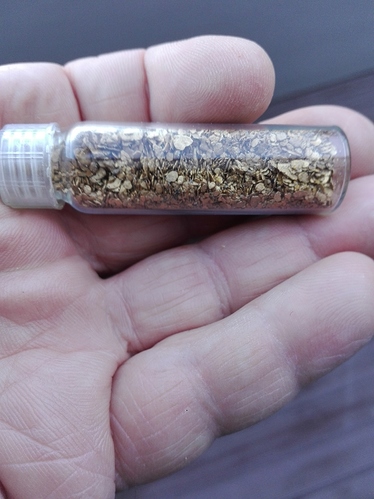 Yep time to move on.

My turn, simple pm will do

Many moons ago I found a few flecks at deep stream, and mercury as well in the sluice.

Worked my way upstream and found a few more.

Thought this is alright, loamed upstream further and nada, tracked back and bingo, more gold in the pan, moved a whole bend thru the sluice, found fk all!

JK good story mate, will go down in history as the ounce that never was, like this story was never true as well!

On a side note, spent some time around that place myself, back in early 90’s.
I’m in Perth now, but itching to come back one day soon and revisit some of those bends!

But seriously, best I ever had was the Shotover 4oz over a sluice (shovelling gravel) in 2 weeks back in 92’, that river just keeps on giving

Richest river in the world I believe, but where does the gold keep coming from? A massive reef under the river? Multiple reefs above the river? Gold fairies?

What part of Deep Stream we’re you in…it had exceptionally rich areas and also some very poor stretches…in one spot there I got a pound of gold and in another a quarter pound troy nugget. In another spot back in the early gold mining days nine pans averaged 12 ounces a pan.

I got the half pound of gold in Deep Stream in three handfuls of gravel over half a minute - some great days were had there. My uncle got 6 ounces there in one small crack and dad got a lot out of one spot years ago. When I got the half pound in three handfuls back in 1984 it was coming on dark so I left and went back the next weekend and got the same again but over an hour or two.

Where is all that gold now Lammerlaw…all spent on wild women,whisky and wheels I bet:wink:

You think? I do not think that is much so the wortds ‘all that’ dont amount to much…what was gold worth in those days? Very little really. Wild Women? - I expect them to pay THEIR way! Whisky? - cheaper to make you own! Wheels - I am no fool, second hand Landrovers just suit me fine and had the same one since 1981!

OK …so you blew it all keeping that landie road legal since 1981…fair enough!!..lol

It never pays to make assumptions - you have made another one - did I say that it is road Worthy? Did I even say that it is on the road? Do you think that maintaining a Landrover is more expensive than maintaining a Japanese 4WD? They are FAR easier to work on…all repairs can be done by yourself…not near as complex… no intricate sensors, computers, circuitry. You might be surprised how cheap that a well maintained Landrover can be kept on the road.
In any case I am a pretty frugal wee fella and know how to get best value for dollar and it sure in hell is not buying an expensive vehicle then sitting watching it depreciate in front of my face.
Besides I am poor and destitute and can’t afford anything better…us pensioners don’t get enough. You need to go detecting less and work harder to pay more taxes so that maybe us oldies got a superannuation increase in order to upgrade my wheels.

Yeah ,I know where your coming from Lammerlaw,life can get very expensive at times,I have 3 teenagers eating me out of house and home,just borrowed 20k to pay for corrective braces for all three!.
As for vehicles I have gone for Isuzu Bighorn’s,pretty tough wagons but V6 so pay at the pump,had 3 in three years,went for a hunt and accidentally left seat warmers on,came back to smoldering molten piles of alloy and rubber where my wagon used to be,fast forward 12 months and this time replacement vehicle was stolen and burnt out with all my tools taken…quite flammable those bighorns darn it!!
Well head down arse up and back to work until I have enough brownie points for another season of gold adventures…can’t wait!!

guess what I am also a landie far with my 1970 series 2a.
having been down the road of new trucks both Japanese and defender I have found that my old landie is the best. (well almost) over $40000 to buy a trident $11500 for the landie. big saving. rego over $300 compared to $43 insurance saving $600 per year service once every 6 months at a cost of 20 lts oil and a filter, compared to $400 . parts are cheaper . inall the mony I save I am better of with an oldie but a goodie. yes I do repairs but the cost is still in the positives oh and by the way there will be no deprecation on the landie in fact I may be lucky and make on it.

down side I get to hold up traffic on the open road as I only travel at 80 km/h but still get over 20 mpg (just) 1/2 hour extra to get to Christchurch from home. 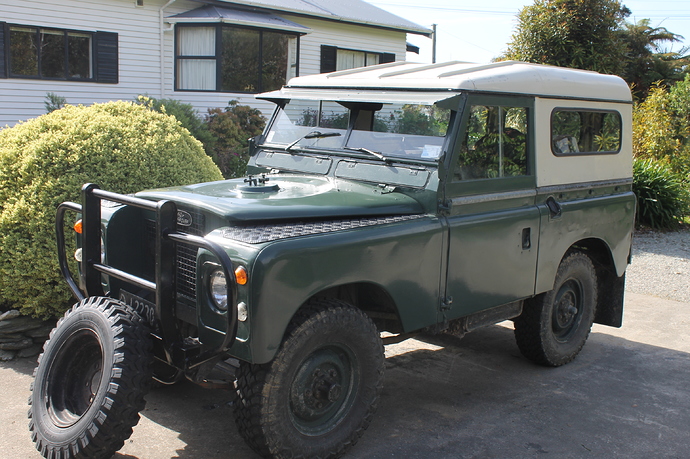 Me jellyarse - mine isn’t that good. David wants to restore it properly. That one of yours is ideal.