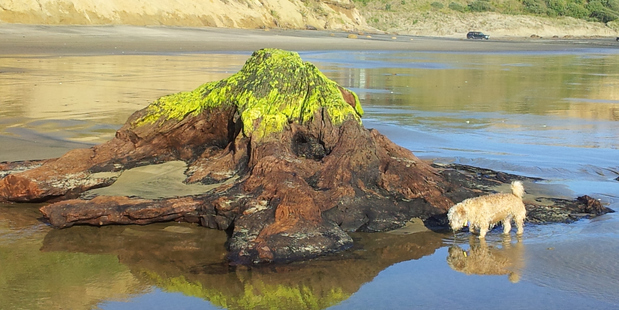 Most of the time Ripiro Beach on Kaipara’s west coast is a fairly flat, unobstructed beach with no rocks above the sand along its 100km length.

It is said to be New Zealand’s longest driveable beach, and at low tide many vehicles use it - mainly locals with knowledge of west coast tides and shifting sands.

Even when flat and appearing hard the sand can hide soft patches or waves can catch cars.

But occasionally the tides and winds chew out millions of tonnes of sand and alter the terrain from a gentle, sand packed slope between the ocean and the dunes - sharply undercutting the dunes, removing soft dry sand and exposing the rocks, reefs, forest remnants and even shipwrecks that are usually deeply buried.

In recent weeks so much sand has been washed away that a large pool ringed by rocks and even giant kauri stumps have emerged near the low tide mark close to Baylys Beach.

Long-time beach watcher Des Subritzky said the phenomenon happens “every now and then”.

While seldom uncovered, the remains of an ancient kauri forest lie well out beyond the low tide line, he said.

Logs, roots and other debris are also often washed up or uncovered.

Rocks get uncovered more regularly near the guts that open between the low cliffs on to the beach, such as Mahuta Gap and Glinks Gully south of Baylys, Mr Subritzky said.

"I’ve seen it when you couldn’t drive along parts of that beach because of the rocks, even at the very lowest tide.’’

The rocks might remain exposed for weeks, months or even years.

Neither the Department of Conservation nor Kaipara District Council have concerns about the changed face of the beach.