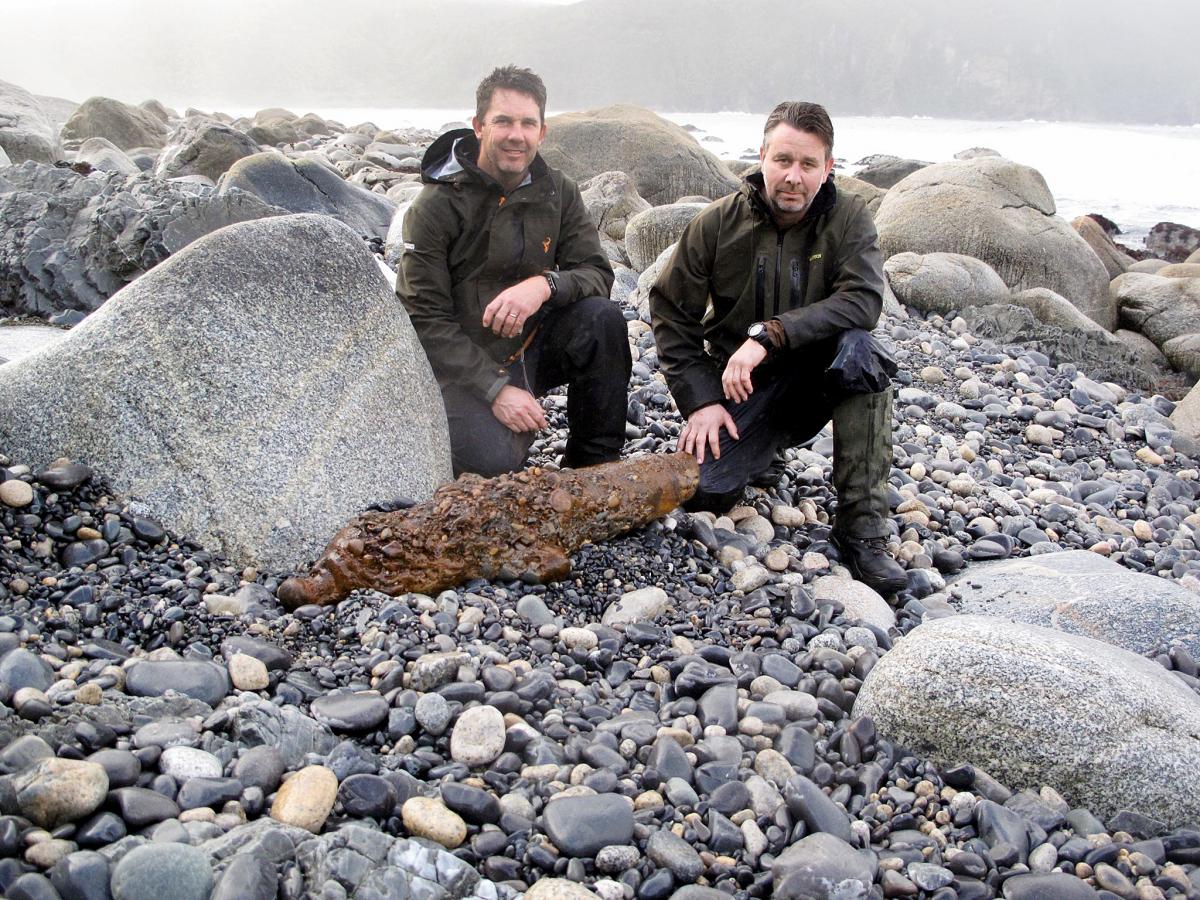 A scientific expedition from Christchurch has found a cave in a remote part of Fiordland where survivors of a shipwreck may have sheltered. The...

I’m pretty sure there was a thread about this a while back on here, about a ships boat going to shore somewhere down there and they had to leave the gun ashore because of conditions?

There are a couple of possibilities for the 1810 date.

Wanted for the brig Active, shortly about to sail on a promising and pleasant vovage, several active able men, who will find proper encouragement.
Apply to Captain Bader.

Captian John Bader also advertised for “a person capable of the duties of chief mate.” Not only was the captain troubled at sea by the elements, but the Sydney thieves stole his ship’s fittings while the vessel was being repaired.

Sailing from Sydney, the ill fated brigantine made the West Coast of New Zealand, and on 16 February, 1810, there left a gang of 10 sealers under David Lowrieston. The gang was really left on upon an island about a mile and a half from the mainland. The vessel then sailed for Sydney never again to be heard of. The unparalleled suffering of the unfortunate men who spent the next four years of their lives on these inhostitable shores will be told when their relief comes to be described.

On 15th December 1813, Captain Grono, in the Governor Bligh, arrived in Sydney from the West Coast Sounds with 14000 seal skins and about five tons of elephant oil (whale). With him also returned 10 men, a sealing gang which had been left on the New Zealand coast as far back as 16th February, 1810, by Captain Bader of the brig Active.

The people who were left as above described were reduced to the necessity of subsisting for nearly four years upon seal, when in season, and at times upon species of the fern, part of which they roasted or boiled, and other parts were obliged to eat undressed, owing to a nausea it imbided from any culinary process. They were left upon a small island with a very scanty allowance of provisions, and the vessel was to come to Port Jackson (Sydney) for a further supply. They had a whale boat, and the only edged implements consisted of an axe, an adze, and a cooper’s drawing knife. In a short time they procured 11000 seal skins, part of which Mr Grono has brought up. In hopes of finding upon the main (mainland) some succour which the small island did not afford, they when thither, but were nearly lost by way, as some of the lower streaks of the boat were near falling out, owing, as was imagined, to the nails being of cart iron. On their safe arrival, however, they found an old boat on the beach, which it subsequently appeared had been left there by Mr Grono on a former vovage. With the aid of this additional boat, when both repaired, they projected an excursion towards some of the more frequented sealing places, and were on the point of setting out when a tremendous hurricane in one night destroyed the boats, and put an end to there hopes of relief.
The only nutritive the place afforded was a species of the fern root, resembling a yam when cut, and possessing some of the properties of the cassada. This they could only procure at a distance of six or seven miles from the hut, which was near the sea side, and had it been plentiful would have been a desirable substitute for better diet; but it was unfortunately so sparingly scattered among other shrubs so as to be found with difficulty; and they solemnly affirmed that they have for a week at a time had neither this nor any other food whatever. With the assistance of a canoe made up of seal skins a party visited their former island, and found their stacks of skins much injured by the weather, but did all they could for their preservation.

This was their seal depot, and out of the usual season they now and then found a solitary straggler, in some instances when they were so reduced by famine as to be scarcely capable of securing those that Providence threw their way. With their axe, adze, and drawing knife they afterwards built a small boat, but with intense labour, as without saws they could only cut one board out of each tree; the hoops upon their provision casks were beaten into nails; and by the same patient and laborious process they at length projected the building of a small vessel, and had provided 80 half inch boards fo the purpose, all cut in the way above described. The fortunate accident of Mr Grono’s touching there has however preserved them from further suffering and peril.

No indication is given of the spot where the men were rescued, nor is it possible to locate it with absolute certainty. " An island about a mile and a half from the main" might describe one of the islands in Dusky Sounds, but the absence of food as mentioned by the party, would hardly fit in with the plenty described by navigators during their stay there.

Secretary Island in Thomson Sound would answer the description. Grono , we know from previous information, was in the habit of visiting this sound; he in fact named it. Thomson Sound connects with Doubtful and forms an island - Secretary Island - the only one north of Dusky of any size. Knowing this, the fact that one of Grono’s boats was picked up, would indicate that the men were left on Secretary Island. ( I think that has been proven in the last twenty years or so)

The following report of the doings of the Sydney Cove during these palmy days of Stewart Island sealing, did not see the light of day until 1826, when in a letter to the Colonial Times, Hobart Town, W Nicholls, ship’s mate describes the following circumstance:

On the 8th January, 1810, I was sent on shore with several other men from the ship Sydney Cove, Captain Charles McLarenat the South Cape of New Zealand, in order to procure seal skins.

After leaving the vessel I made towards the shore. and was some distance from it when it began to blow a gale of wind directly off the shore. This forced us to go into a bay near the Cape, contrary to my wish, as I had passed it before, and saw that it was iron- bound, having no beach. I proceeded to the north-east end of the bay to procure the best shelter I could, and found to my great surprise, an inlet.

At the end of the inlet there was a pebbly beach, where we hauled up our boat for the night. The next morning one of my men told me he had found a mast near the beach; I went to look at it, and found it to be a ship’s top-mast of a very large size. It was very sound, but to all appearances had lian in the water a long time. It was full of turpentine, which, of course, had preserved it. As I was compelled by contrary winds to remain in this inlet three days I had time narrowly to examine the mast. I measured it, and found it’s length 64 feet from the heel to the upper part of the cheeks; the head had been broken off close to the cheeks. There were two lignum vitae sheaves near the heel, which I took out.

Each of these sheaves was 16 inches in diameter; had an iron pin, two round brass plates a quarter of an inch thick, and four small iron bolts or rivets, which went through the sheaves and two brass plates to secure them.

I have been some years in the British Navy, and am well assured that the bushing was not English. On taking off the plates from the sheaves I found inside each of the plates ‘No 32’, which was, without doubt the number of the vessel which the mast belonged to. Every ship in the British Navy is numbered, and I doubt not it is the case in other countries.

When the ship came for me and my men I informed Captain McLaren about the mast. He looked at the work and gave it as his opinion that the bushing was French.

There are also several other ships the disappears in this area around the same time so we may never know.
The cannon size is small and were carried on most shipping of the time for protection.

The sealer ship - Active- left a gang of ten sealing men from Sydney on Open Bay Islands 3.1 miles off the coast from Okuru River Mouth South Westland. That is between Haast & Jackson Bay. The ship left the islands on the 16th February 1810 & was never seen again. The sealing gang were assumed to have gone down with the ship. After years of hardship & having constructed a rude boat from what timber they could fashion into frame & lining it with seal skins they made for the mainland. The sandflies drove them crazy & they returned to the Open Bay Islands to get away from them. They finally saw a ship & managed to get its attention. They were picked up & arrived back in Sydney on the 15th of December 1813.

The men’s fate has been turned into a song that sort of tells of their ordeal.

Bloody incredible yarns!
Back when one adventure could shape your whole life.
I think it was a show called first crossings? Did a programe on the hadst outer islands, was really good.

That First Crossings program was a bloody ripper.

Here is a bit more about that song. NZ FOLK SONG * Davy Lowston

In the early 19th century, sealers were often dropped on islands to hunt for their prey. In 1810 a group of 10 sealers were taken to Open Bay Island off South Westland. When their ship, under Captain John Bedar, was lost at sea, the men were stranded...

Click on the blue arrows for more info https://www.researchgate.net/figure/Wall-of-stone-hut-on-Taumaka-Open-Bay-Islands-thought-to-have-been-built-by-sealers_fig8_237648891

The poor buggers, like the song says, the drinking water on that wee island would have been shit when it didn’t rain. But then again it is the west coast…