Any gold been found in te anau?

Just wondering if anyone has every heard of someone finding gold near te anau?

interesting article. those old guys had big balls. 9 months away to find no commercial amounts of gold.

They killed a native emu. Native Emu??? I hope it wasn’t the last surviving Moa.

So it wasn’t the Maori who killed off the Moa after all!!

I killed the last ‘moa’ - I wanted to cut the lawn but the bastard wouldn’t go…one of those Masport rotary moas…I couldn’t fathom out why it was sick so I beat it to death with a sledge hammer.

Thats a bone of conjecture as to who killed the last Moa - see above - I obviously killed the last Moa but the question is - am I a white man or a Maori - I am having a little trouble with that question myself - I was most defintitely a white man but then the Ngai Tahu won their Treaty of Waitangi claim and got $170 million and so now I am a Maori - us Maoris are rich with these Treaty of Waitangi claims but us whitemen are poor because theres nothing in it for us - so its a no brainer! Gotta be a Maori.

Well, they were obviously still around in the early 1830’s as Charles Dickens mentioned them in Oliver Twist… 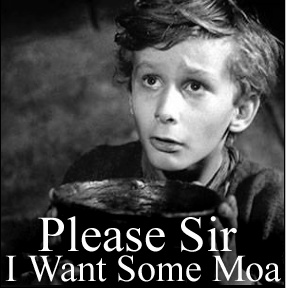 don’t forget paddy at the bealey hotel saw that one in the 90s so they must still be round. ive got one in my shed that’s almost dead. it still eats the grass but don’t know for how long. don’t want to kill it as doc will fine me $20000.

I wondered about the Emu/Moa I am guessing that it was a Weka?

There is gold in upper Whitestone, Waiau between Lake Te Anau and Manapouri, and in the lower Waiau as well.

Some months ago I purchased a 3 volume set called ‘Moa Sightings’ by Bruce Spittle. It was at an auction and I paid $10. It was so sad that I paid so little for something so complex and originally expensive.They are very detailed account every alleged Moa sighting in NZ in history and it goes back to the 18th Century. It is masterpiece of research and thousands of hours would have gone into producing these three books on such a specific topic. There are 283 pages on the 1993 Bealey (Craigie Burn Forest Park) Moa sighting with coloured pictures, maps, interviews, opinions, conclusions etc. Probably so many pages because it is recent history. Bealey Moa sighting 23018.pdf (2.1 MB)

I attached 4 pages from that book - the first 2 pages and the last 2 pages.

I was living in arthurs pass at the time . remember it all well. it was possible in my mind, as there are areas and vallies that people just don’t go into in the area.

When you said about Parthurs Ass it reminds me of my past - you will know Bealey - up behind that Lodge or what ever it is at Bealey you can see an exotic plantation. I had a hand in planting that plantation back in 1969.

In 1979 I had a girlfriend whos father owned the Otira Hotel. She wanted me to go there on either Christmas Eve 1979 or New Years 1980 to celebrate by giving her a thrill on the bar or as she put it she wanted me to celebrate by ******* her on the bar. She was a bit impulsive…on another occasion in 1979 she phoned me at home and ordered me to go to town right away to **** her but I refused as I had just come home from town and didnt intend going back. Now she told me that if I didnt go to town to **** her then she was going to drink an entire bottle of brandy. I wasnt going to get the headache and splatter a technocolour yawn all over the carpet so why should I worry! in any case she got pissed out of her tree and went along to the Waimate Town and Country Club, snapped a billiard cue in half and the gauged the baise out of one of the billiard tables. Next day when I went in after work the manager asked me what the hell happened the night before between me and her so I told him that I wasnt going to come back into town to do nefarious things…I asked him why he asked and he told me what she had done!

Great story lamerlaw iwe have had some great times in the otira hotel and been up too a bit of mischief in the place. We have a crib in otira but don’t go to the pub anymore as the new owner and us don’t See eye to eye but a bloody great place to spend some time to look for treasure

yep spent the odd evening there myself . when coming home from greymouth and finding the pass snowed in having to wait for the train so as I could get through the hill. those were the days when you could ride the engine. great fun.

I had a cobber - actually he came to visit my old man and myself just last night as we were up in South Canterbury…any how this cobber of mine and his brother were both deer cullers and rabbiters in their time and bloody marvellous rifle shots.

Back in the day another chap I know who was a friend of theirs used to be a train driver on the route through Parthurs Ass. Mike would hitch a ride and get dropped off at a certain place to go hunting and get picked up on the way back.

The driver used to push the train to get well ahead of schedule so he could have an hours hunting as well. My cobber said that it was really scary in the cab at the speed they were going and mentioned it to the guard who said that next time travel at the back in the guards van…which my cobber did.

That also reminds me that I threw many an empty beer bottle out of the train carriage in the Otira tunnel.

have you got her phone number.