Useful info to know for those seeking access into areas to explore. One of my pet peeves is locked gates encountered across paper roads when I’ve driven 3 hours to go explore a new area… Do you know your parks from your reserves? Which ones might be swapped tomorrow, which will be there for your grandchildren? Understand the legalese behind the land parcels that collectively… 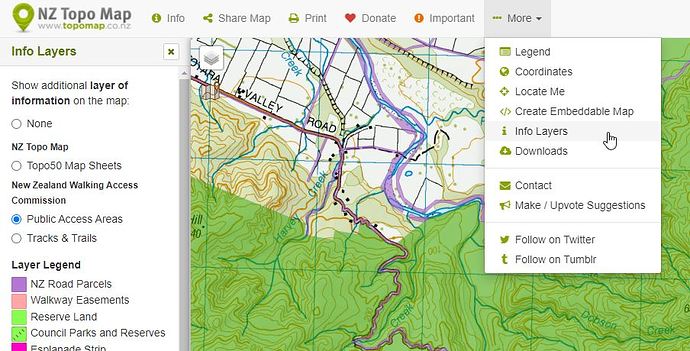 I’m going to be more proactive from now on taking photos and GPS coordinates to submit to the regional council to hopefully take action on.

The main problem is where actually is the paper road? Normally the answer is to get it surveyed at your cost and go from there. Many farm tracks and existing roads are not where the ‘paper’ roads are indicated on maps. Been through this with my own claim. I went to the forestry management company to ask for a key to the lock gate they put over the road. When they refused I produced the emails from LINZ indicating the gate was in fact over a public road, they went away and did some research and handed me a key… a lot of bluffing in some cases

The main problem is where actually is the paper road?

That’s where the maps help out

And if that’s part of an app on your phone it can be very handy on the ground.

The locked gates I’ve encountered so far have been on formed tracks. Very frustrating.

Definitely helps to be armed with the knowledge at the very least. I’ve been challenged by farmers in the past who didn’t press the matter when I stated I was following a paper road / marginal strip to get into an area. Helps to be friendly about it.

Thats not quite what I meant Gavin, take Lake Taylor for example, the land owner says 'who said the current road or farm track is where the mapped road is? it could be 50m over there or maybe 50m the other way. So the council say it has to be then surveyed and who pays for it? And the fight begins…

My father in law had some land in atarau near moonlight which he was trying to sell to a logging gang but the neighbour who was a greenie stopped him and it turned out that the access road was actually about 3 meters to the left of the paper road so he got a surveyor and a digger in and had to get a new road put in at a massive cost.

I worked on a place where there was a clear right of way (even old road signs from the 20s) but the land holder told me he moved the gates a few meters along and he was all good. It really sucks, as I can see both side’s, he doesn’t want every idiot from town driving through his place… also it’s some great country every self respecting explorer would love.

Hi Gavin you obviously know your way around these maps, do you know of any app that can convert SHP Files from NZPAM to GPX Files that I can use with my Offline Memory Maps… I have had a look online but haven’t found any that dont want a Visa Card payment, something I am reluctant to do with unknown websites.

I’m not 100% sure but I thought GPX files were pretty basic, only good for storing simple data like tracks and points? So you might need to check to see what other file options Memory Maps supports.

I used to use this one which worked very well, and is free.
https://anyconv.com/shp-to-gpx-converter/

I would suggest that even though it might be a paper road going through a farmers land, please ask the farmer first, there might be lambing etc going on. be good miners not obnoxious ones with rights.

Thanks I will take a look at that one

Hey Gavin if it’s got a locked gate on a paper road you are allowed legally to remove the padlock.

I’ve read conflicting stuff about that over the years. Have you got an authoritive source to set my mind at ease?

there was a guy down here a few years back who used to lock a gate to a paper road and it got cut off every weekend. he suggested giving a key to selected ppl but that wasnt on either and it ended up in court. cocky was told not to padlock it and he had to put up a sign at gate asking ppl to shut it after they went through. i think most were ok with that.

To summarize - unless the paper road has had its status changed by council gates cannot be locked.
Dewalt battery grinder should be an integral part of every prospectors kit

An unformed legal road, more commonly known as a paper road, is a parcel of land that is legally recognised […]

A few year ago some guys in a 4x4 had to be rescued from near Deep stream as the public road, in season, they were on had a locked gate at the end of their drive from Alex…the Dunedin police spent hours trying to get to them as a storm came in. Had this ended differently the farmer would have been liable.
Once in a similar part of the country we were following a formed marked public road to a river and I noticed we were being followed by a white ute. I put the binoculars on and discovered it was the local farmer who watched us for hours gold panning! And as we were packing up to leave he drove off and we arrive at the gate to find it had been chained shut and we were locked in(illegal). What the farmer did not realise was that his gate was shit and our geo hammers made short work in straightening the pins of the hinge, lifting the gate off we drove out and returned it back to normal and gave a big smile and wave as we drove past the watching farmer.

Tip: Look along the chain links as there may be a gap in one of them…giving the impression the gate is locked.
Do not destroy another lock unless your safety depends on it, as this is still regarded as personal property, but cut the chain and install your own lock instead.
Always have with you all relevant maps, topo, walking access etc and despite bad attitudes and overly sun burnt necks, keep cool and accept some people, despite what the maps, rules/laws say, will keep defending their entitled sense of ownership, these battles are best taken up with the access commission, linz and council etc.