I first got a detector in 1981 I think - Dad brought two into the country - his one was a Whites 6000 and it is still more or less new in its box AND the original batteries are still OK! Mine was a Garrett Deepseeker - they were both the best detectors of their day.

I found this photo in the newspaper and my memory went back to the early 1980s - I was partially raised in this house as my Grandparents purchased it from the Edmonds family.

In the back yard we found ancient Maori adzes including some nice greenstone ones and then when I got my detector I went mad there.

Also beside the steps were several Snider projectiles where someone must have had a target prior tot he construction of the house and about fifty meters away out of the scope of this photo several Snider cases were found indicating where the marksman had fired form.

got any photos must be some interesting stuff packed away somewhere.

Looks a great place with alot of history

These are some of the Maori Adzes I found in the front and back yard and garden of my grand parents place depicted in the newspaper article. My grandfather must have thought the craters and mounds of earth must have looked like the shell craters of Flanders and the Somme where he was during WWI!

So it could be said that my grandparents section was a grand place to both detect and find Maori artifacts. 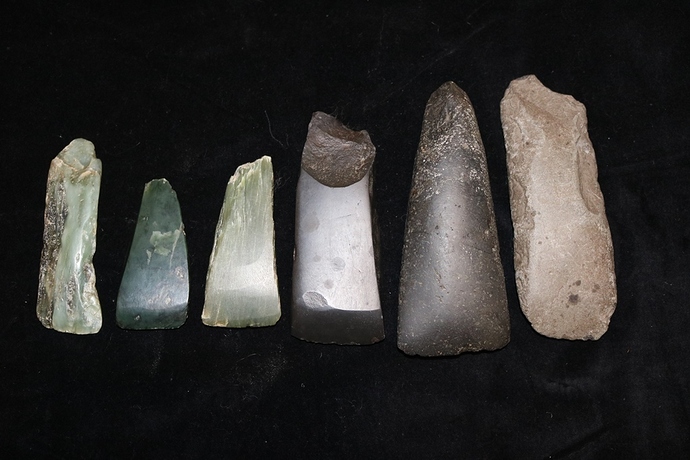 what do you recon the dates are on the adzes.wonder how they got them so smooth only one with any signs of knapping is the one on the right.

Wow, awesome finds. It is amazing how they are so well crafted all by hand.

They used blocks of stone to smooth and polish them - I found one of the stone blocks when I was a kid but it had broken into three pieces and I only found two of the pieces - I kept it all these years and I think it is still in the garden - (rusges out to see) - yep they are still there so took a fizzograph.

I actually decided to take the photo of the grinding stone pieces plus the next closest three items - a stromatolite, a fossil rock with Turritella and finally a cannon ball found in a cliff where the old time ships had discharged it, either trying to shoot a shag on the cliff as I would do (Did I say that) firing a practice shot or discharging a cannon prior to entering port which is the more likely scenario.
The big rock on the right hand side is actually a petrified tree trunk and the steel thing above it is a gate valve from a gold mine.

One of these days someone will do well when I kick the bucket finding all sorts of treasures and pillaging them or more likely they will either be buried or thrown in a skip to the tip! 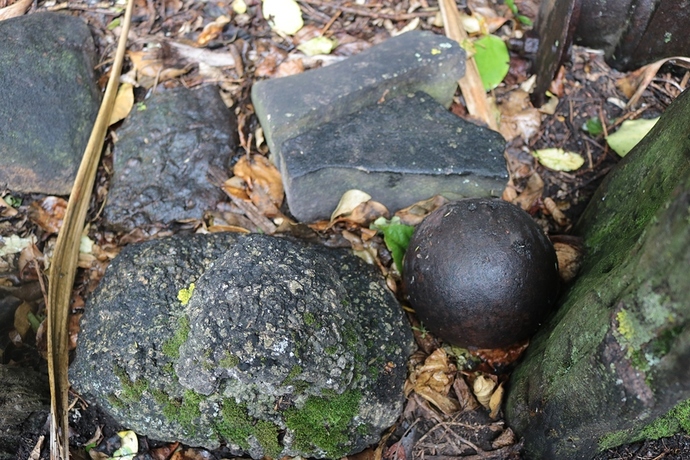 I had forgotten to put on the coins I found within the scope of the photo in the newspaper article above or within 25 yards.

I go tmany many more but some have got mixed up with my silver coin hoard and many were sold when the Hunt family pushed the price of silver up to 20 times face value.

The ones in this photograph are a very few of the ones I can identify which I got with my Garrett Deepseeker about 1981 through 1990. 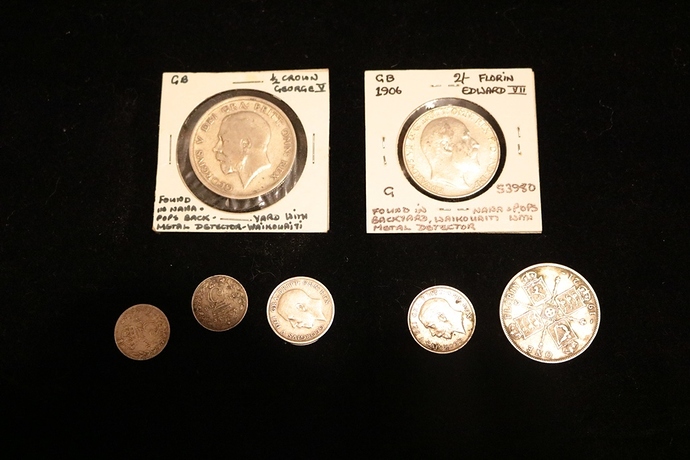 nice coins lammerlaw,might be a while till we see silver up there again

Could be. I have often wondered about making a pilgrimage to go and look at a couple of my not so secret secret spots.

Golly you left Kiwiland and didnt take me as buggage boy - two demerit points. I am heading to the tall timber for an undetermined time so unsure of when I will be back in the big boring little city. I am heading somewhere where the driving is fun - four lanes each way in places - me loves it! Sort of like Crocodile Dundee in New York.
Yes all things are possible.

Hi lammerlaw the silver is great I have spent some time around waikouaiti I remember going to a really old house and the stair case went up through the chimney you walked through it I remember there being a few relics lying around and a nice big lawn that surly would have had some good stuff in it do you know the house?.

Must have been easy digging Mr Lammerlaw? Being an Edmonds family property the coins must have been “sure to rise” (sorry!)

What street was it in - was it behind a large macrocarpa hedge in Thomas Street on the beach side of the railway line?

Wrong Edmonds sorry - it was the Edmonds family of Edmonds Hardware, a very wealthy hardware company which thrived in Dunedin back many years ago - I think it lasted well over 100 years.

My grandparents purchased it from them in 1955 and my grandfathers tool shop (he was foreman in the coach building shop at Hillside) was the old Servants quarters.