69 Caliber Minie Ball or not?

Just swinging in the back yard pulling out all the ugly sounding signals I’ve never bothered to dig and came across this possible 69 Caliber Minie Ball? 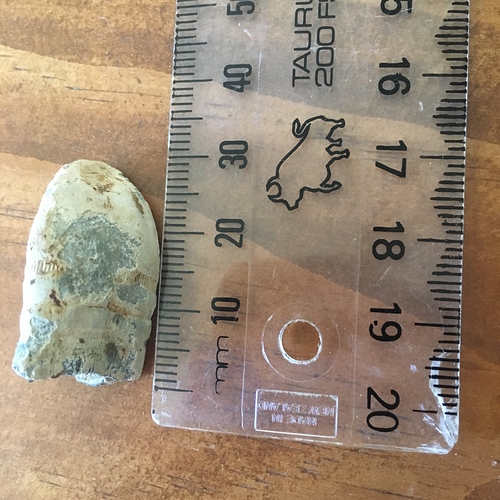 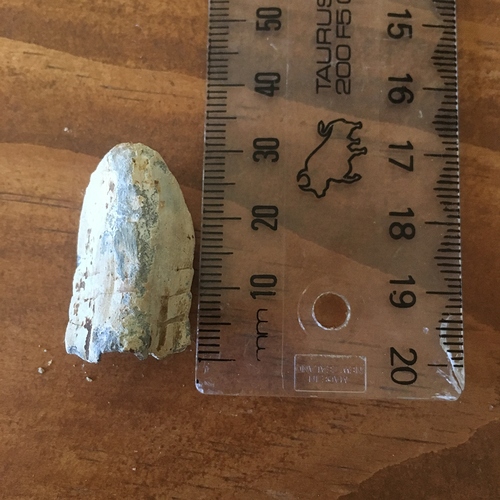 What is its diameter - if it has a hollow base and possibly with a plug in which is made of clay or otherwise then it might be a mini ball but could also be a .577 Snider bullet for the Snider Rifle which can be seen second up from bottom or also a projectile for the Enfield Pattern rifle shown at bottom which is also .577 It is about 5mm too long for a Snider BUT it has all the characteristics of a Snider projectile - three eveny spaced grooves with the little lines around the grooves. 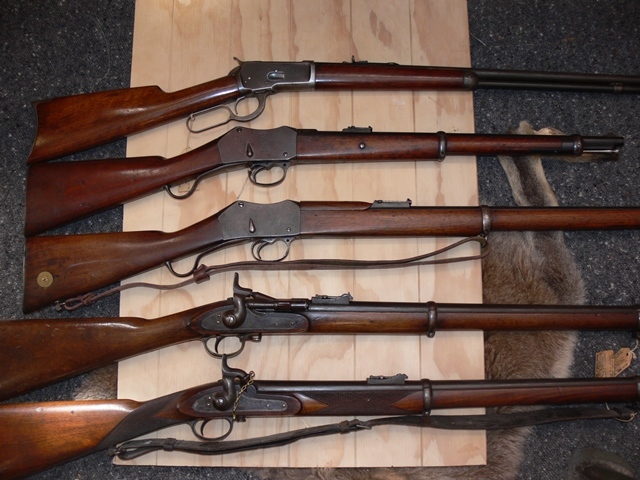 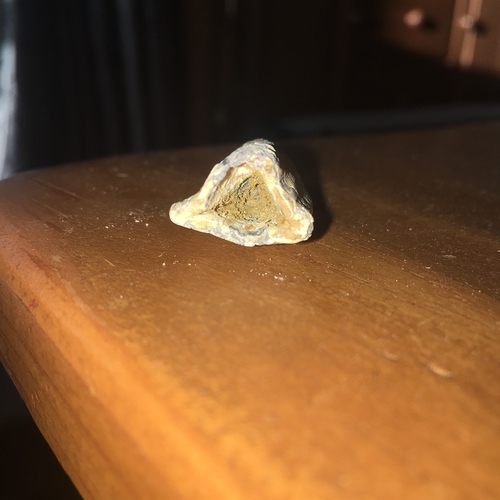 Nice collection of guns you have there lammerlaw , looking at the ammo puts it into perspective how old the rifles are ! what cal are the little ones under the top row ? perhaps they are not that little as even the 303 is dwarfed by the monsters below !!

The little ones are 297/230 Morris tube ammunition for using in a sub caliber Morris tube for practice in Martini Henry .450/577 rifles. A rook rifle was also made which took these cartridges. I still shoot them even though the ammo has not been made for eighty or so years as I have hundreds of loose rounds.
The top left cartridge looks like a pistol one but it isnt - its a .303 training bullet and it goes inside a steel tube shaped like a .303 bullet which in turn goes in the rifle.
As for the guns - they are only five of 20 on one wall and 17 on another wall, 10 on another wall plus 32 in floor rifle racks - I have guns and rifles every where.
All of those cartridges are part of the 1867 to 1900 evolution of British Military ammunition.

And i thought i was bad at collecting them ! sounds interesting thanks for the reply , i had a play with an old muzzle loader recently it was all good until my mate put the ball in the wrong way it got jammed in there & neither of us were game to fire it !

Do you collect them? What are your interests in that regard?

& 22,s a 22mag I like guns ,hunting,dredging its good i don’t watch much tv at all i like to be outside but must admit i do park my self up infront of the computer more than i should.
After looking at your guns it reminded me of that auction they run in Auckland each year is that where you got your from ? i had a look on there sight a few weeks ago they have some amazing stuff its a pitty i don’t have any endorsements on my gun licence !!
Cheers

i h ave an extensive collection ranging from a $30,000 up 1921 Thompson gun down to civil war indian war and british military, and so on. The SKS is a grand rifle an dyes we have a couple plus enough ammo to last me my lifetime I guess.I also have cap and ball revolvers - about 150 in all I guess. Yes guns hunting and gold are two of my main interests
right now I am in auckland an dusing a laptop and not used to them so more later when I am back indunedin

your guns are all in pristine condition, very nice, m8 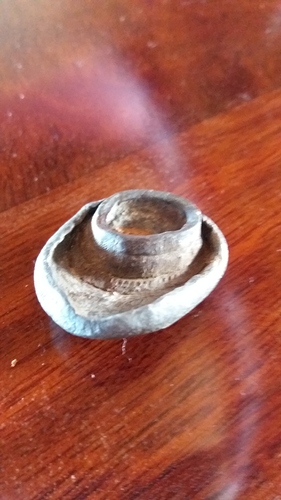 it hit something, m8 could be a bit of DNA under the fold

The Maori Wars were largely over when the Snider first arrived in New Zealand. It was not really a Maori War gun - the Callisher and Terry was the standard long arm. The Sniders were in the hands of various redoubts toward the end of the wars I think BUT it is believed that Gilbert Mair may have borrowed one to try out in the field.

gday lammerlaw is lt true the americans came to nz to sell arms i read somewhere thats so i found a 1836 half dime in ch,ch a while ago dident have much wear on it would have been dropped quite soon after being minted,cheers

A large number of 1851 Colt revolvers in .36 caliber, Adams revolvers and Tranter revolvers were used in New Zealand during the Maori Wars. The Adams and Tranters generally 54 bore (.44 cal approx) or 38 bore (.50 cal approx) The big .38 bore pistols were veritable hand cannons and developed for use in those parts of the British Empire where natives and various enemies worked themselves up into a Adrenalin fueled rush such that it took a mini cannot ball to stop them. The Adams were generally 1851 Adams or 1854 Beaumont Adams and the Tranters often 2cnd or 3rd Model and also the more conventional 4th Model

American Arms did come to New Zealand but generally privately BUT New Zealand DID buy a lot of COLT revolvers during the Maori War era, mostly 1851 Navy Colt six shot revolvers in .36 caliber but also some others were purchased by the early BNZ - Colt 1861 Navy or 1862 Police and Pocket in Navy caliber. The Otago Police also purchased, but from England quite a few Colt revolving carbines.A lot of COlt Model 1849 Pocket revolvers in .31 Caliber also came out with miners and privately - Iknow of three proven gold fields ones alone.

Other makes of arms also came out in great profusion and some very very scarce, Evans repeating rifle, Henry Brevette, Coopers revolver, transition revolvers, pepperboxes, Spencer and many others.

Well known colonial shops did import and sell a large number of American firearms including Colt revolvers and later automatic pistols up until 1921. Especially A & W McCarthy in Dunedin, Hazards of Auckland and Tisdals 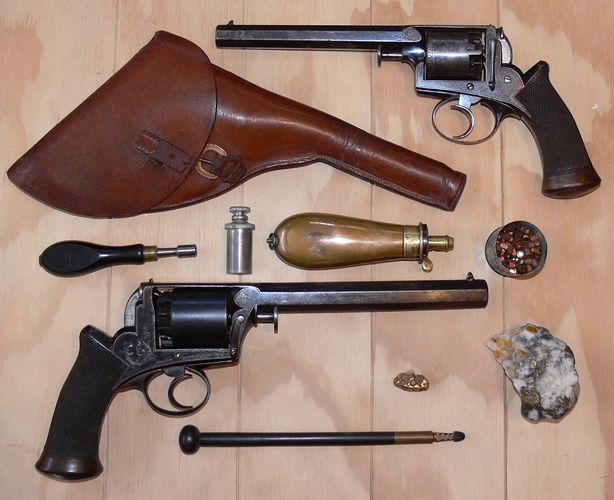 gday,i see with those pistols percussion caps so that must mean you had to individualy load each chamber and put a cap on each.just imagine having that slung on your hip with that amount of black powder,